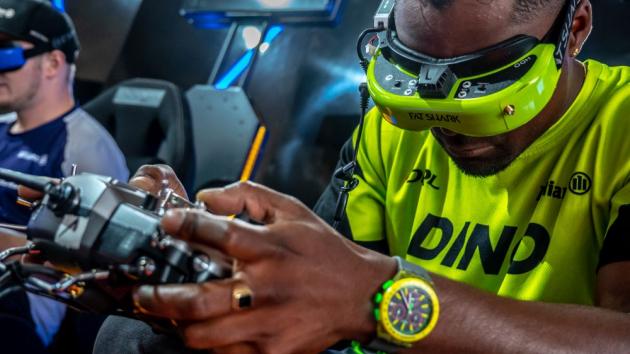 Drone racing may not be everybody’s idea of sport, but for Harry Neuhaus, the Drone Racing League’s (DRL) senior director of business development and partnerships, there are few spectacles more exhilarating than the sight of remote-controlled quadcopters hurtling through neon-inflected, 3D courses at speeds in excess of 80mph.

“Unlike any other properties, whether esports or leagues, the DRL merges the real with the digital,” says Neuhaus. “We combine the thrill of Star Wars pod racing with the real-life adrenaline of Formula One and wing suit flying.”

Established in 2015, the DRL brand of drone racing has been hailed by some observers as ‘the sport of the future’, and as a young, emerging property that draws heavily on technological innovation, the New York-based league has sought to reflect its futuristic positioning in a commercial model that embraces creativity and experimentation at every turn.

Much of that is down to its organisational structure. The vertically integrated nature of the league is such that it retains outright control over all of its main assets - from the production of live events and content, to brand integration and the design of its LED-emblazoned Racer3 drones.

“In terms of what partners are looking for, I think it’s that association with the future, with the sport of the future. I think a lot of brands want to either be, or think of themselves as being, ahead of the curve, and this is one of the unique points about DRL.”

Adding to the appeal for brands, says Neuhaus, is the fact that the DRL always seeks to construct customised sponsorship packages and promotional campaigns that deliver maximum value to its commercial partners. With an emphasis on creative control and organisational agility, it carves out specific marketing assets and activation opportunities for every one of its sponsors.

“Every package is a bespoke package and we build it with our partners,” says Neuhaus. “That vertical integration gives us that incredible flexibility to incorporate our partners’ goals and aspirations, and then we just make sure that we can measure results.”

Neuhaus points to the various ways in which the DRL has worked with its partners, including the likes of Swatch, BMW, Allianz and Cox Communications, across its flagship racing circuit, the DRL Allianz World Championship Series.

In partnership with BMW, he notes, the league staged one of its 2018 World Championship Series races at BMW Welt, the German carmaker’s experiential facility located adjacent to its headquarters in Munich. The aim of the deal was not to highlight BMW’s sponsorship activities in traditional sport, but to promote BMW Welt as a destination to potential new visitors.

Elsewhere, the DRL has integrated several brands into certain on-course features. Both Allianz - title sponsor of the World Championship Series since 2017 - and Swatch have branded gates through which drones must fly to complete the course, for example, while some of the series’ pilots are sponsored by the brands and participate in sponsor activations at on-site fan zones.

Besides live event integration, content creation on behalf of brand partners is also a key focus for the DRL’s commercial department. Ahead of the launch of season two of ‘The Grand Tour’, the popular motoring show formerly known as ‘Top Gear’, the DRL worked with Amazon Prime Video to produce a content series called ‘Drone Games’, which was released on YouTube and showcased during the DRL’s first live event in the UK at London’s Alexandra Palace. The league also devised a US-wide advertising campaign for Cox Communications in which a pilot artfully navigates a drone through his mother’s trinket-laden house - supported, of course, by Cox’s ultra-fast WiFi connection.

DRL has worked with its partners, including the likes of Swatch, BMW, Allianz and Cox Communications, across its flagship racing circuit, the DRL Allianz World Championship Series

“One of the biggest things [our partners] are always looking for is that we strive to organically or authentically integrate the brand or the products into whatever it is that we’re doing,” says Neuhaus. “Everything is also based on their budget parameters, so we’re very careful to outline things for them. It’s a very open, collaborative dialogue with our partners as we build these proposals.”

The DRL audience, according to Neuhaus, is “spread globally” but it is nevertheless predominantly male, with the vast majority falling between the ages of 13 and 35. “They are certainly millennials, Gen-Zs,” he says. “They’re very tech-driven, gamers, racing fans, and when I say racing I mean any motorsport: MotoGP, Formula One, Formula E. And then also action sports enthusiasts, people who are adrenaline junkies.”

While that audience conforms to the typical profile of the esports following, Neuhaus foresees a future in which the greatest growth in terms of the DRL’s fanbase will come through female audiences.

Creating recognisable, relatable stars from its roster of pilots will continue to be a priority for the DRL as it seeks to foster greater awareness of the series. That the pilots wear partially face-obscuring headsets whilst competing matters little, according to Neuhaus, not least since many are already among “the most-followed FPV (first person view) pilots” around.

“I’d say the majority of the time when the guys are on camera, they don’t have their goggles on, so they’re very recognisable,” he notes. “When we were at the BMW Welt, there was a line out the door of people trying to get the pilots’ autographs on their caps, on their shirts.”

It follows then that as awareness of the DRL and its pilots grows, and the series’ live events continue to expand in size and stature, the league’s merchandising operation will develop in tandem. For now, Neuhaus says that particular operation is still a work in progress, but the early signs are that there is already a market for officially licensed DRL products.

“The biggest thing for us is to continue to grow the awareness of the sport. Don’t forget, we’re only three years old. I mean, this is a brand new sport. If you’re bringing up a brand new brand, whatever it is, it’s going to take a while to start generating awareness, so that’s what we’re doing right now.”

As a content-driven property, it is no coincidence that the DRL’s investor base is comprised of a mix of major media entities and tech-focused investment funds. Its backers, which have come through two initial rounds of financing, include the broadcaster Sky, Formula One owner Liberty Media, and World Wrestling Entertainment (WWE), as well as several venture capital firms such as Hearst Ventures, RSE Ventures, Lerer Hippeau Ventures, and Courtside Ventures.

“The greatest thing that we have is an incredible set of investors that come from a variety of disciplines,” says Neuhaus. “We’re surrounded by people that know this space very well and so we have amazing guidance. What we’re doing right now is trying to learn from some of their other investments and the challenges they’ve faced, and making our own decisions.”

At present, the DRL’s broadcast footprint spans around 90 countries worldwide thanks to distribution deals with the likes of ESPN in the US, Sky Sports in the UK, Germany’s ProSieben, and Fox Sports Asia. Partnering with those types of traditional networks from the outset has provided a platform on which to build audience reach, but Neuhaus says the league’s media strategy is likely to evolve as new modes of content delivery come to the fore.

“Originally, we wanted to be on broadcast because, as the name states, it’s broad,” he explains. “We were trying to reach as many people as possible through free-to-air television, and as the seasons develop and as the thirst for more DRL and more accessibility continues to grow, we are now evaluating several other opportunities. All that stuff is in the works.”

At the time of writing, the league is also in the process of finalising its 2019 calendar. In 2018, the seven-race series made stops in California, Arizona, Nevada, France and Germany before a season-ending event in Saudi Arabia last September. New races in new markets will be added this year, highlighting the growing importance of the live event experience in bringing the product to new audiences.

“That’s always a challenge for us because we take over a venue and each race is a major production,” Neuhaus says. “It’s truly amazing. When people see it they’re like, ‘oh, now I get it’. Even though they’ve watched it on the telly, once you see it live you totally understand.”

In the interest of attracting more fans to drone racing, the DRL is also keen to retain and develop its participatory elements. The league’s simulator-based Swatch DRL Tryouts are now in their third year, for instance, offering amateur drone enthusiasts the chance to win a US$75,000 professional contract.

We are the only esport that can take someone from player to professional. You’re flying on the simulator one day, three weeks later you’re flying with the pros on TV

“As the only esport that breaks the digital divide, people are realising that this is quite a unique and exciting opportunity,” says Neuhaus. “We are the only esport that can take someone from player to professional. You’re flying on the simulator one day, three weeks later you’re flying with the pros on TV. Nobody else can do that, right, whether it’s League of Legends or Fortnite or even Fifa. There are other sports that try to do that, like Formula One, but you’re never going to be driving against Lewis Hamilton three weeks after you win the esports tournament.”

Also new for this coming season is the Artificial Intelligence Robotic Racing (AIRR) Circuit, which will see unmanned, machine-powered drones competing across a four-event series that will take the form of undercard races throughout the DRL championship. Participating teams of university students and technologists will be tasked with programming advanced AI software built around Nvidia’s Jetson platform for autonomous vehicles - although the one-design drones themselves will be developed by the DRL’s own engineers.

The creation of the circuit has come about through a multi-year partnership with aerospace and defence giant Lockheed Martin, which is funding what is known as AlphaPilot, an open innovation challenge to develop AI for high-speed racing drones. The winning team is set to collect US$1 million, and the 2019 season will culminate in the compelling prospect of a man versus machine finale between the winner of the AIRR Circuit and the DRL world champion.

“Everybody is talking about autonomous this, autonomous that; well, now we’ll have autonomous drone racing,” beams Neuhaus. “The fact that we are the only ones doing that puts us - as the sport of the future, the future of sport - way ahead of the game. That, to me, is super exciting.”