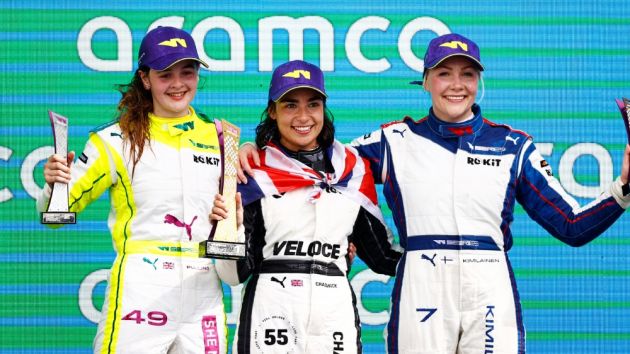 It has been suggested that W Series losing its USP of being the only all-female motorsport series could prompt investors to decide between the championship and Formula One’s new offering.

“Investors now have a choice between a series that they know is in financial difficulty and a series with strong backing and ‘F1’ in its name,” Lizzie Isherwood, group director of CSM Sport & Entertainment, told the BlackBook.

At the time of the announcement, the F1 Academy was said to be looking to co-exist with the already established W Series, but there could be unintended consequences from its creation.

“Only time will tell, but it certainly doesn’t make W Series’ issues any easier,” continued Isherwood.

“One of the biggest challenges the W Series has faced from a competition standpoint is the ability of the field has been so incredibly mixed.

“The F1 Academy may look for a more even playing field in sourcing its future talent, bridging the gap between karting and Formula Three, acting as a first rung on the single-seater ladder.

“This focus on proper grassroots or the first step beyond grassroots is, however, where the focus needs to lie, and if it does become a net for the next generation, then W Series may find itself short of competitive female drivers.”

An initial issue that will need to be overcome for the F1 Academy to establish itself is funding. Formula One is covering €150,000 (US$161,000) of each entry, but that still leaves each driver having to match this total in order to drive in the series. This is where sponsorship opportunities will begin to arise.

“Women’s sport sponsorships increased by 20 per cent in 2022 and we know from speaking to brands that there is a real desire to be more visible in women’s sport,” said Isherwood.

“Interest in motorsport, particularly Formula One, partnerships is continuing to rise, with big-name consumer brands like Jack Daniel’s and Peroni signing team deals, and a surge in technology partners from Mandiant cybersecurity to Alteryx Analytics, capitalising on the integration opportunities within the sport.

“There are, however, a few factors that work against the F1 Academy on this. The first factor is awareness. We’re seeing an increase in investment in women’s sports that are more advanced from this perspective.

“The likes of the LPGA [Ladies Professional Golf Association] and the LTA [Lawn Tennis Association] already have a global, established platform. While the F1 Academy has Formula One in the name, it’s unclear as to how many Formula One races this series will support and whether the action will form part of a broadcast rights deal, so ROI from a pure exposure perspective will certainly come into question.

“The second factor is the opportunity for authentic storytelling. As we’ve seen from the influx of technology brands into the sport, there’s a desire to use partnerships as a proof point for products and solutions.”

Although Isherwood feels there is the issue of lower-level series not carrying “the same weight as Formula One, WEC [World Endurance Championship], Formula E or MotoGP”, there are still opportunities for more locally focused partnerships.

Despite its financial uncertainty, it would seem W Series’ cause is strengthened by being an established championship on the support calendar of Formula One. However, Isherwood argues that this may not be enough.

“One area that would usually be considered a positive for the W Series is that it is an established series, with a number of sponsors already on board,” she explained. “However, the fact that the F1 Academy will fall under F1’s overarching leadership does provide it with greater security from the off than W Series.

“We know how expensive it is from a logistical standpoint to run and maintain a global motorsport series, no matter how small, and F1 Academy will benefit from the financial protection of Formula One, while W Series is left to fend for itself.

“It was noticeable how much support came out in favour of W Series when its situation became apparent in Singapore, and my expectation is that the series organisers will be doing whatever they can to challenge supporters to become investors and put their money where their mouths are.

“The exposure that the series had in 2022 through broadcast deals certainly strengthened its offer, but clearly wasn’t enough to counter the challenges it was facing. As we face economic challenges across the world in 2023, brands will be reticent to part with cash for a series on a knife-edge.”