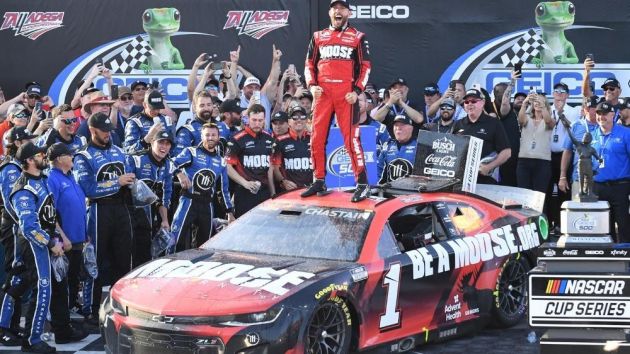 Nascar Cup team Trackhouse Racing have announced Worldwide Express as the team's primary sponsor for the next two seasons.

The freight and logistics will serve as the primary sponsor of Ross Chastain’s car for 17 races and four more times on the car of Daniel Suárez.

The blue and black primary scheme will be on full display on 3rd May on Suárez's car during a track test session at Pocono Raceway.

The Worldwide Express paint scheme will debut in competition on Chastain’s car at the Nascar All-Star Race at Texas Motor Speedway in Fort Worth, just miles away from the company’s headquarters.

“We are proud to partner with Trackhouse Racing. Trackhouse has been one of the most exciting and interesting teams in 2022,” said Rob Rose, president of Worldwide Express.

“Everyone wants to win, but Justin Marks’ approach is setting them up to win even bigger in the long-term. The obsession with excellence and continuous improvement, down to the last detail, is what sets their program apart.

“This is directly aligned with the business approach shared by Worldwide Express employees, franchisees and agents.”

Worldwide Express, along with its sister brands of GlobalTranz and Unishippers, is among the top non-asset logistics providers in the country, offering solutions for parcel, less-than-truckload (LTL), and truckload shipping and managed transportation services delivered through proprietary technology.

Due to the company’s unique data assets and business intelligence capabilities, more than 115,000 shippers, from small and mid-size to enterprise businesses, benefit from enhanced visibility and efficiency for their supply chains.

Trackhouse Racing is in their second season in the Cup Series. Florida native Chastain gave the organisation its first victory on 27th March at Circuit of the Americas in Austin, Texas.

Both he and Suárez, the Cup Series’ only Mexican driver and former Xfinity Series champion, have contended for victory at several races this season.

“Partnering with someone like Worldwide Express has been one of the goals since establishing Trackhouse Racing,” said Trackhouse Racing founder and owner Justin Marks, who brought in entertainer Pitbull as a team partner last year as part of its off-track effort to expand the sport’s fan base beyond its normal demographic.

“Worldwide Express is a powerful brand and we want to expand its reach among our vast ecosystem of American industry connections and within the sport.

“We also want Worldwide Express to show Trackhouse Racing how it does business and learn what we can from such a successful company.”