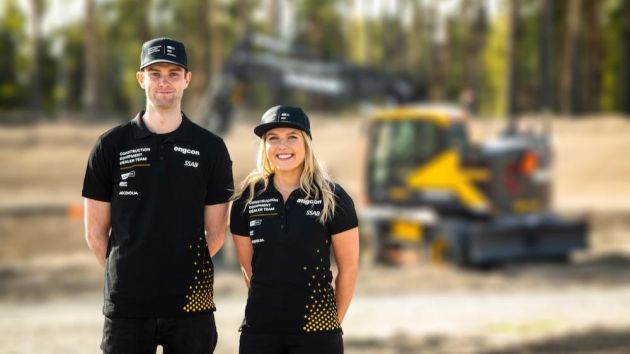 Construction Equipment (CE) Dealer Team have announced their driver line-up for the 2022 World Rallycross (RX) Championship season, including Klara Andersson as the first permanent female competitor since the series began in 2014.

The CE Dealer Team confirmed their participation in the global rallycross series last week, with a multi-year commitment to the championship and a pledge to prioritise sustainability, diversity and inclusivity.

Following that, the racing outfit has now named Sweden’s Andersson as a full-time driver. She will compete alongside Finland’s Niclas Grönholm for the newly-formed team.

Andersson, the younger sister of Magda Andersson, a TouringCar winner in European Rallycross, is the third female driver to compete in World RX and the first with a full-time seat.

“I am very proud to become the first female full-season World RX driver – this is by far the most inspiring thing I have done in my life,” said Andersson.

“I have a lot to learn, but my long-term goal is to become the first female World Rallycross champion.

“I have an unconditional love for rallycross; it’s so intense and unpredictable, and I can’t wait to get behind the wheel for pre-season testing.

“While I have rallycross experience, World RX and the awesome 500kW (680bhp) electric beasts that we will race are new to me and none of us are expecting to get anything for free – we have plenty of hard work ahead of us to establish ourselves at the top.”

Jussi Pinomäki, team manager at CE Dealer Team, added: “CE Dealer Team and its partners strive for gender equality, and our programme is a key part in driving this shift via Klara and Niclas.

“They complement each other well in terms of raw talent and experience, and we are confident we have a robust set-up that will enable our long-term goal of fighting for the FIA World Rallycross Championship titles.”

Andersson follows in the footsteps of Ramona Karlsson and Mandie August, the former of which competed in four races in World RX’s debut season, finishing level on points with 1997 Formula One world champion Jacques Villeneuve.

August made her World RX bow in the 2020 double-header series finale at Barcelona. However, both drivers only returned for one race each the season after their respective debuts.

World RX is not only making a statement on diversity this season but also sustainability, as this year will be the first time the championship goes fully electric.

The series’ 2022 season begins at Höljes, Sweden from 2nd to 3rd July.