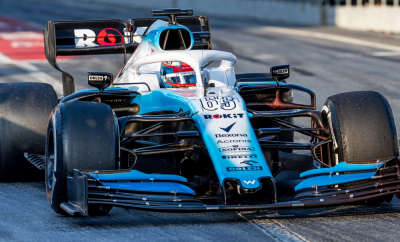 Rokit Williams Racing have named Indian firm Tata Communications as their official digital transformation partner ahead of the 2019 Formula One season.

The global partnership will see Tata, which specialises in telecommunications solutions and services, provide Williams with its digital infrastructure to enable real-time data transfer between the pitlane garage and the motorsport team’s UK factory during all Grands Prix.

Tata’s digital infrastructure includes a sebsea fibre network that carries around 30 per cent of the world’s internet routes. The system will allow Williams’ engineers to share vital data and insights, and collaborate on race strategy even when they are thousands of miles apart.

“Tata Communications plays a central role in all areas of Formula One - arguably the most challenging technology environment there is,” said Claire Williams, the motorsport outfit’s deputy team principal. “We’ve chosen Tata Communications as our new partner because of its deep understanding of the Formula One ecosystem and its unique technology requirements, and the company’s ‘whatever it takes’ attitude to support our team.”

Tata has been the official connectivity provider of Formula One since 2012, during which time it has supported the series through its network, hosting, broadcasting and security services.

“Since 2012, Tata Communications’ role in Formula One has continued to grow, and we’re incredibly proud to now work with one of the most iconic teams in the paddock,” added Mehul Kapadia, the company’s global head of marketing and managing director of Tata’s Formula One business.

“Our aim is to unleash the full potential of digital transformation in live sports by enabling organisations like Rokit Williams Racing to harness the power of our technology capabilities.”

As well as Formula One, Tata also collaborates with the MotoGP motorcycling championship and golf’s European Tour, while its services are also used within soccer, sailing and cricket.

The new Formula One season gets underway on Sunday with the Australian Grand Prix in Melbourne.