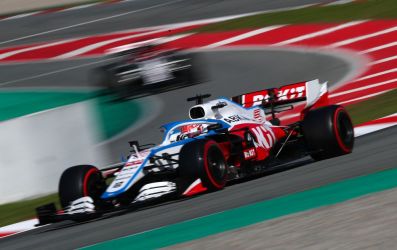 British racing outfit Williams have announced they are considering selling their Formula One team after a dip in the company’s financial results.

Offering a minority or majority stake will be considered, but so too will an outright buy-out.

‘The WGPH board believes that the strategic review and formal sale process is the right and prudent thing to do in order to take time to consider a full range of options and put the Formula One team in the best possible position for the future,’ said a statement.

‘As part of this new strategic direction, the WGPH board is undertaking a review of all the various strategic options available to the company.

The Grove-based team say they are yet to receive any formal approaches but have confirmed ‘preliminary discussions’ with possible investors. Williams also stated that, despite the change of approach, the company has both the funds and the intent to reclaim its place on the Formula One grid as and when racing returns.

The statement continued: ‘Any interested party participating in the formal sale process will be required to enter into a non-disclosure agreement with WGPH on terms satisfactory to the WGPH board.

‘The company then intends to provide such interested parties with certain information on the business, following which interested parties will be invited to submit their proposals. The company is not in receipt of any approaches at the time of this announcement and confirms that it is in preliminary discussions with a small number of parties regarding a potential investment in the company. There can be no certainty that an offer will be made, nor as to the terms on which any offer will be made.

‘While the company has faced a number of challenges, Williams currently remains funded and ready to resume racing when the calendar allows in 2020.’

Williams also confirmed they have terminated their title partnership with technology brand Rokit, effective immediately, though have made no further comment as to why at this stage.

The pair had agreed a two-year extension to their agreement in July 2019, after Rokit initially came on board in February of that year as part of a deal reportedly worth US$20 million until the end of the 2021 campaign.

Williams have finished bottom of the Formula One constructors’ championship for the last two seasons.

Elsewhere in Formula One, Renault's interim chief executive Coltilde Delbos has confirmed that the French outfit are commited to competing in the global motorsport series.

“We confirm that we intend to stay in Formula One,” she told a conference call.

“The new regulations, new cap in term of investments, because we had less investment than some of our competitors who are spending a lot of money, so F1, we are here, and we stay in Formula One.”