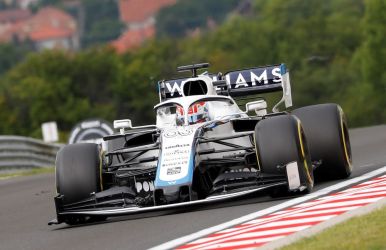 Williams Racing have announced UK-based sportswear brand Umbro as their official kit supplier from the start of the 2021 Formula One season.

The pair reunite in a multi-year deal after Umbro was with the team for the 1987 British Grand Prix. To commemorate this, Umbro’s logo will feature on the front wing end plate of the FW43 car at the 70th Anniversary Grand Prix at Silverstone this weekend.

“We are delighted to be welcoming Umbro back to the Williams commercial family,” said Tim Hunt, commercial and marketing director of Williams Racing. “It’s been a long time since our association in 1987 but in that time, Umbro have established themselves as a globally recognised brand in sport.

"Both Williams and Umbro have a rich history and proudly sit as iconic British brands who share the same fighting spirit and I am excited by the opportunity that this new partnership brings.”

Sam Lucas, head of sports sponsorship at Umbro UK, added: “As a brand, Umbro prides itself on producing the best kit to meet the demands of elite sport. With our experience in this area, we are excited to bring this to Williams Racing and play a part in the teams’ pursuit of success.

“Umbro’s approach has always been a pioneering one, when it comes to the kit we develop. We have a proven track record in performance sports apparel and aim to achieve the same with our recent rugby partnership. This is no different to Williams Racing and their innovation on and off track, so we are looking forward to working together as of next season.”

Staying with Williams, their esports operation has been confirmed as one of eight teams to feature in the newly-announced V10 R-League.

Launched by UK-based esports organisation Gfinity and Abu Dhabi Motorsport Management (ADMM), the digital motorsport competition will be part of the Global Racing Series. It is the first stage activation of a five-year agreement between Gfinity and ADMM, which was announced in June.

The Global Racing Series, which is played on the Assetto Corsa title, will feature a range of internationally focused virtual motorsport leagues and competitions, designed to provide commercial opportunities with brands, broadcasters and teams. Two seasons will run per year.

As well as Williams Esports, the other teams competing include Ford (Fordzilla), JAESA Team Suzuki, and the BWT Racing Point Esports Team.

All content will be available across the Gfinity Digital Media Network and all team channels, as well as through regional and global distribution partners. Season one will air as live at the end of August and throughout September 2020. Broadcast schedules are currently being finalised. Season two will air in the first quarter of 2021.

“There has been a massive spike in interest in virtual motorsport, a key pillar of our company strategy,” said Gfinity chief executive John Clarke.

“We are excited to launch the V10 R-League, which has already attracted some of the biggest names in racing. The format has captured the imagination of teams, drivers, broadcaster and brands. The Global Racing Series and V10 R-League contribute positively towards Gfinity's stated goal of being profitable in Q1 2021.”