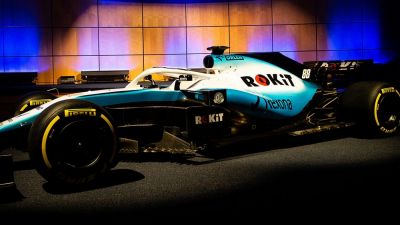 The Williams Formula One team have unveiled global telecommunications company Rokit as their new title partner.

The multi-year deal means the UK-based motorsport outfit will be known as Rokit Williams Racing for the forthcoming season, bringing to an end an agreement with Martini, which opted not to prolong its four-year association with the team.

The new sponsorship deal includes the placement of Rokit’s branding on the side of Williams’ race cars, while the company’s logo will also feature prominently on the race suits and helmets of drivers George Russell and Robert Kubica.

In addition, Williams and Rokit will work together to create race lifestyle content and interactive activations around key races.

Claire Williams, deputy team principal for Rokit Williams Racing, said: “We share many similar values and aspirations with Rokit; primarily putting engineering and innovation at the core of everything we do in our pursuit to be the best – the perfect platform from which to start a partnership.”

“With Rokit launching in 2019 we wanted a global platform that would help us tell our story of innovation,” added Rok Brands chairman Jonathan Kendrick. “Williams Racing is the perfect partner. With them we can bring Formula One to audiences in new and pioneering ways. Through our glasses-free 3D technology and our Wi-Fi capabilities, we aim to make Formula One even more accessible for all.”

The motorsport outfit will compete as Rokit Williams Racing for the first time on 17th March, when the new Formula One season gets underway with the Australian Grand Prix.