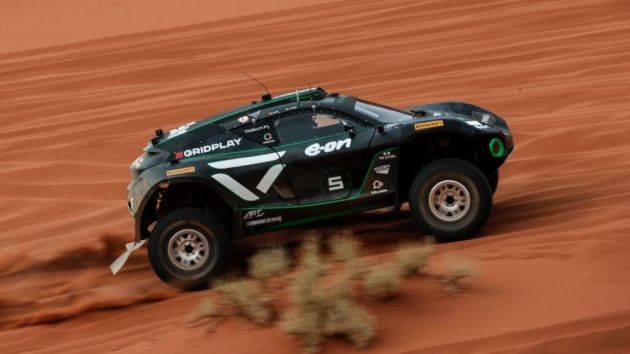 Veloce Racing and E.on are continuing their collaboration for the second season of Extreme E in 2022.

The partnership signals a union driven by sustainability and engineering to inspire people in the move to electric vehicles, ‘green collar’ jobs and skills, and greater diversity across their respective industries.

Veloce Racing and E.on, the UK’s largest renewable electricity provider, began collaborating ahead of the Extreme E season finale last year. The sport for purpose championship raises awareness of the climate crisis and sustainable solutions by showcasing electric motorsport in remote areas of the globe damaged by climate change.

During its first-ever season as a professional racing outfit, Veloce Racing scored a breakthrough podium finish at the Ocean X Prix, further establishing itself as a disruptive force in the industry.

The continuation of the partnership between Veloce Racing and E.on highlights both parties’ commitment to forward-thinking energy solutions, with both organisations becoming increasingly synonymous with sustainability and innovation.

E.on is one of Europe’s leading energy companies, with its sights set on supporting millions of customers on their own journey to a sustainable energy future, both in the UK and on the continent.

With thousands of sustainable projects to help transform homes, businesses and cities, E.on’s grids and customer solutions are already saving more than 99 million tonnes of CO2 a year and showing no signs of slowing down.

Alongside the E.on branding on Veloce Racing’s Extreme E e-SUV at races, the pair are also collaborating on a range of activities and creating engaging content with the aim of raising awareness on a range of topics closely linked to both racing and energy.

E.on will also have access to Veloce’s vast esports and gaming audience, allowing both parties to engage with and inspire the next generation together.

This partnership will focus on the push to decarbonise transport through electric vehicles and expanding the electric vehicle charging network across Europe, as well as developing greater sources of renewable electricity and promoting greater gender diversity in the worlds of engineering, energy, and motorsport.

Activities will feature an exclusive behind-the-scenes look at the Extreme E squad as it progresses through the 2022 season, in-depth interviews with Veloce’s racing stars, alongside environmental and diversity-focused projects.

Daniel Bailey, chief executive of Veloce Racing, said: “We’re thrilled to have E.on joining us for this Extreme E season following the success that was our collaboration for the Jurassic X Prix last year.

“E.on is at the forefront of the energy industry and the fact that they are working towards a more sustainable future means they line up perfectly with Veloce’s own goals.

“Our combined experience will help shape some amazing content around the themes of sustainable innovation and equality. All of us here at Veloce are excited to be working with E.on again and look forward to seeing what we can achieve together this year!”

Michael Lewis, E.on UK's chief executive, added: “This is our second season working with Veloce and inspiring people about the switch to lower carbon motoring and playing a part in a zero-carbon world.

“There is so much in common across the two organisations, whether it's a commitment to sustainability and taking action for the climate, or increasing the diversity across our industries, and we couldn’t have a better partner to share our vision.

“Throughout the Extreme E season, we’ll be telling those exciting stories, whether it’s providing 100% renewable electricity for EVs – in real life and by powering esports competitors – or providing charging points and renewable energy solutions for homes, businesses and cities, we know great things can be achieved when we all do our bit.”