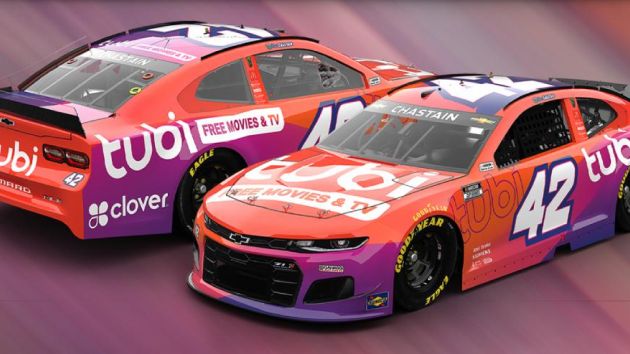 The deal sees the advertising video-on-demand (AVOD) platform get prime branding on the number 42 team’s car and driver Ross Chastain’s race suit, with the partnership slated to begin on 21st March at Atlanta Motor Speedway.

"The car looks great and I’m excited to welcome Tubi to the number 42 team for the Atlanta race," said Chastain. "Fox does a great job bringing Nascar into homes each weekend through their race broadcast and it’s great that our team can help highlight the Tubi streaming service from Fox to those same fans."

The deal is set to begin on 27th March in Tennessee. As part of the collaboration, LiftKits4less branding will feature on the trucks as the title sponsor.

Nascar has also announced that it plans to introduce a new Covid-19 screening process for race officials and essential personnel at the Cup Series race in Atlanta. Trained dogs will be used to detect coronavirus as a line of defence to limit the virus' spread.

"We think that these dogs and this capability is going to allow us to rapidly confirm that all of those people entering the essential footprint on Sunday — that’s race teams, that’s Nascar officials, that’s the vendors that work inside the garage — all those folks are Covid-free or not," said Tom Bryant, Nascar managing director of racing operations.

"The ability to do that has kind of been the math problem that we have continuously tried to solve since March of last year."

Nascar will work with the 360 K9 Group which will supply two sets of trained dogs to assess personnel when they arrive at the circuit.

If the dogs detect coronavirus within an individual, they will be isolated and will undergo comprehensive screening. The dogs will not be used to screen drivers or fans.

According to tests done by the 360 K9 Group, the ability of dogs to accurately detect traces of coronavirus within an individual is 98 per cent.

This screening process has come almost a year after the coronavirus outbreak in March 2020 and marks the same circuit where the Cup Series had to be halted due to safety concerns.