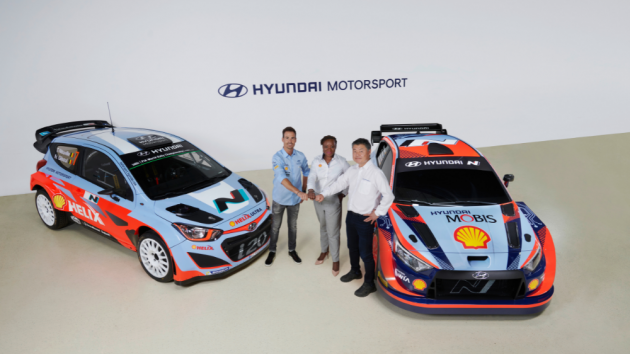 Shell has extended its title partnership with Hyundai Motorsport, continuing as the techinical partner for its World Rally Championship (WRC) outfit for another three years.

The two companies formed their WRC relationship ahead of Hyundai Motorsport’s debut WRC season in 2014 and have since developed a mutually beneficial collaboration.

Over the past eight years, Shell has supported the team across several iterations of technical regulations, including some of the most advanced cars ever to grace the WRC stages.

Hyundai Motorsport and Shell have celebrated two manufacturers’ titles together, in 2019 and 2020, as well as its most recent victory in Rally Italia Sardegna, the first for its new car.

The technical partnership has delivered an additional 1.5 horsepower, representing an average of six seconds advantage at each rally, where even the most marginal of gains can make a huge difference.

“It will enable our teams to continue their joint work to help us achieve our respective current and future sustainability ambitions and initiatives. The learnings of that joint work will continue to be transferred directly into the development of Shell Helix Ultra lubricants to benefit Hyundai customers around the world, helping them to minimize their carbon footprint.”

Hyundai Motorsport president Sean Kim added: “Shell has been with us since the very start of our WRC journey. It is testament to the strength of our working relationship that we can extend the partnership for three more years. While our two companies share a corporate relationship, our WRC collaboration has technical development at its core.

“We have been through two major regulation changes in recent years, the first in 2017 and again this season. Shell has been with us every step of the way. They played a key part in our two title successes, and we’ve been pleased to carry on the winning partnership into the new hybrid era. This is far more than just title sponsorship of the Hyundai Shell Mobis World Rally Team, it is a true technical collaboration.”