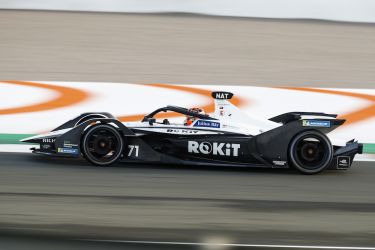 Following the takeover, Susie Wolff will retain an interest and continue in her current role as team principal of the Monaco-based outfit, working alongside recently appointed deputy team principal Jérôme d’Ambrosio.

Team founder Gildo Pastor, the president of Venturi Automobiles, also retains his stake in the team, which will continue to race under the Venturi name and remain headquartered in Monaco.

A statement from the team said the investment is testimony to the ‘continued progression and commercial appeal of Rokit Venturi Racing and the Formula E World Championship as a global business platform.’

Wolff, who took the helm of the team in June 2018, echoed that sentiment, saying the deal “demonstrates the positive role that the forthcoming cost cap has to play in the commercial viability and therefore appeal of the sport to investors and partners.”

Rokit Venturi Racing have competed in Formula E since the series’ inaugural 2014/15 season. Last year, driver Edoardo Mortara secured the team’s first and only race victory when he won the Hong Kong E-Prix.

Swid said that the investor group initially explored the possibility of investing in Formula One three years ago but was drawn to the all-electric series because of “the unique business case the sport and the team present”.

“Investing in Venturi, with its heritage as an original team guided by the visionary Gildo Pastor, and competing in an exciting sport that promotes global sustainability and pioneering electric mobility is a great opportunity,” Swid added.

“Every forward-thinking corporate board in the world is cognisant of the importance of sustainability and is looking for ways to invest in its future. Formula E is in its intermediate stage, having successfully overcome the hurdles of its early period. With this strong foundation, it is a great time to invest when the championship is established and there is still so much growth to come.”

Elsewhere, Formula E has partnered with BBC Global News to produce what it calls ‘a set of pioneering online films to bring the all-electric motorsport to a new, digital audience around the world’.

The short films will be housed on a dedicated content hub within the BBC StoryWorks website. As part of the project, BBC Global News’ facial coding technology will be used to track the audience’s emotional engagement and ‘identify a new community of Formula E fans’.

The 2020/21 ABB FIA Formula E World Championship gets underway on 16th January with a double-header in Santiago, Chile, before heading to Diriyah in Saudi Arabia for two races the following month.