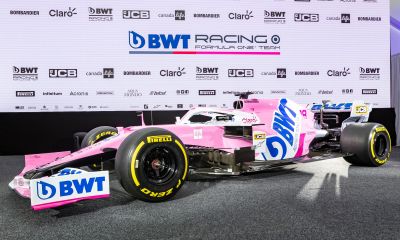 The team have worked with BWT since 2017, when the Austrian water technology provider became a principal sponsor. Then known as Force India, the team subsequently switched to their distinctive pink livery to reflect their ties with the company.

Yet it was SportPesa that was named as Racing Point’s title sponsor for the 2019 campaign as part of a multi-year agreement that would see it pay US$8 million in its first season and US$10 million in 2020, only to walk away after a solitary year in Formula One.

The Kenyan betting brand has already seen a premature end to its shirt deal with Everton this week after the English top-flight soccer club chose to cancel the tie-up, reportedly worth UK£9.6 million (US$12.5 million) a year, cutting the contract short by two seasons. An Everton spokesperson said the decision was taken to “best deliver on our commercial plan and to grasp the new opportunities now open to us”.

Speaking to Autosport, Racing Point chief executive Otmar Szafnauer shed more light on SportPesa’s exit as the team’s title sponsor, admitting the company was having “some difficulties in their home market”.

“They still want to be involved but maybe at a different level - not as title [sponsor],” he said. “So we're still talking to them and they're friends of the team and hopefully we can also include them as part of our sponsors and partners.”

The team boss also confirmed that BWT’s new deal with Racing Point was a “multi-year” agreement. Financial details of the new arrangement have not been disclosed.

“Since 2017, we have thoroughly enjoyed building a successful partnership with BWT and we’re delighted to be celebrating our fourth year together by welcoming them as our title partner,” Szafnauer said.

“This expanded collaboration truly reflects the loyalty, commitment and energy that they bring to the Racing Point family.

“I’m pleased we could launch our season here in Mondsee at the home of BWT and shine a spotlight on the valuable work being done by BWT to drive sustainability.

“We have enjoyed many memorable moments both on and off track already and we now look forward to adding more in the 2020 season.”

This year will be Racing Point’s final campaign under their current guise before rebranding as Aston Martin in 2021, a switch that comes after the team’s major stakeholder, Lawrence Stroll, acquired a 20 per cent stake in the luxury car manufacturer last month.