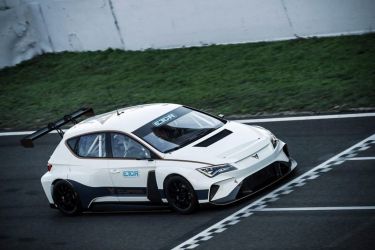 The inaugural season will feature six showcase events, starting with a time trial at the Goodwood Festival of Speed in July. Round one in Salzburg, Austria, begins on 24th July, while other legs are planned for Denmark, South Korea and China. The showcase season will end at the 24 Hours of Daytona in the US in January 2021.

Drivers’ and manufacturers’ titles will then become available from next year, with Pure ETCR’s first full season set to feature eight rounds at venues across Europe, Asia and North America.

Pure ETCR, which is backed by global governing body the International Automobile Federation(FIA), will be a multi-brand series and use 500 kilowatt vehicles.

It has also been announced that American manufacturer Goodyear will be a founding partner and the official tyre supplier of the series.

Andrew Georgiou, president of Eurosport and Global Sports Rights & Sports Marketing Solutions, said: “As Pure ETCR is unveiled today, we see the opportunity to drive the advancement of electric motorsport through Discovery’s worldwide expertise in media and broadcasting, as well as Eurosport Events’ proven track record in growing some of the most popular motorsports series in the world.

“Discovery brings unrivalled global scale and an expansive portfolio of platforms and channels to maximise engagement around Pure ETCR, helping to reach passionate motorsport fans as well as broader communities that enjoy motoring and sports every day.”

Francois Ribeiro, head of Eurosport Events, added: “Pure ETCR aligns with the automotive industry’s rapid move towards electrification and we are extremely proud to launch this new global series today.

“Pure ETCR will have all the key ingredients to appeal to motorsport fans and to help shift the perception of electric vehicles into one that shows they are fun, aspirational and fast, while also giving the largest automotive manufacturers a racing platform on which they can showcase their latest electric cars on a global scale.”

As part of the series’ commitment to clean energy, no air freight will be used to transport vehicles between races, with sea freight being utilised instead, a move which Pure ETCR says is 100 times less impactful to the environment.

Hydrogen-powered generators will also be employed in the paddock due to their efficiency compared to traditional internal combustion-powered units.