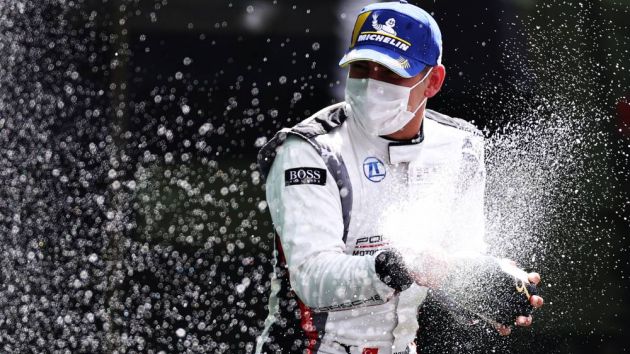 The Porsche Mobil 1 Supercup one-make series has announced that it is committing to lower carbon fuels such as advanced biofuels and efuels in an effort reduce its CO2 emissions.

The series is working with oil and gas corporation ExxonMobil to test the viability of the lower carbon fuels in a two-stage strategy.

Drivers competing in the championship this year will tackle the season's eight-race calendar with a blending of bio-based fuel obtained from food waste products, which will achieve an octane rating of 98.

Then, in 2022, the series plans to introduce efuels sourced from the Haru Oni pilot project in Chile that produces hydrogen, which is then combined with carbon dioxide drawn from the atmosphere to produce methanol. Based on test results, the efuels will reduce greenhouse gas emissions by 85 per cent when blended to current market fuel standards.

Porsche and ExxonMobil have been working together to test the commercial viability of these fuels since 2019, with the aim of transferring them from race to consumer adoption.

The move also means that the Porsche Mobil 1 Supercup will be the first international racing series to adopt sustainable fuels.

"The testing of new technologies in racing has a decades-long tradition at Porsche. We’re proud to be able to assume a pioneering role for Porsche on the critical topic of efuels," said Oliver Schwab, project manager at Porsche Mobil 1 Supercup.

"The Supercup is the first international racing series to use renewable fuels. Given that our races are held as part of the Formula One World Championship, we’re very much in the eye of the media, the public and other manufacturers involved in motor racing.

"As a pioneer in the use of synthetic fuel in Porsche race cars, the Porsche Mobil 1 Supercup takes on an important communication function for the significance of efuels at Porsche.”

The Porsche Mobil 1 Supercup series is held as a support race during eight Formula One rounds. The first event of the 2021 season will take place from 20th to 23rd May in Monaco.