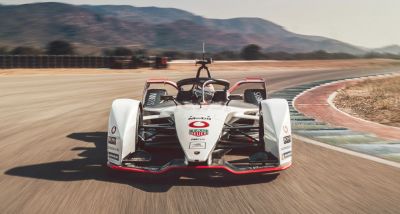 Formula E’s Porsche Motorsport team have announced Vodafone as their official communications partner for their debut season in the all-electric racing series.

The deal sees Vodafone secure branding on the first all-electric racing cars in Porsche’s history, as well as the drivers’ uniforms, when Formula E gets underway in November.

The five-year contract includes the provision of communications equipment and technical support, although no financial details have been given.

In addition to the partnership in Formula E, the pair will also be collaborating in the esports field in the near future.

Fritz Enzinger, Porsche Motorsport vice president, said: “Vodafone has been a long-term partner of Porsche Motorsport and is helping us to develop both racing and street vehicle technology. We know Vodafone strongly believes in the innovative mission of Formula E and we are thrilled to have them by our side as Porsche Motorsport enters this new racing class.”

“There’s a natural alignment for Vodafone with Formula E, a next generation, technology driven sport that appeals to a broad and ever-growing audience and that has concern for the planet at its heart,” added Ahmed Essam, Vodafone Group’s chief commercial officer. “We have a very positive working relationship with Porsche and together we’ll look to break boundaries in vehicle technology.”

Vodafone already has a strong history of technology development with Volkswagen Group, the parent company of Porsche. Vodafone is one of Volkswagen Group’s Fast partners – a small group involved in automotive and transportation research and development.

Vodafone’s sponsorship of the Porsche Formula E team also builds on a successful six-year partnership between the brands in manufacturer prototype racing, which yielded three overall victories in the Le Mans 24 Hours as well as three world championship titles in the World Endurance Championships.