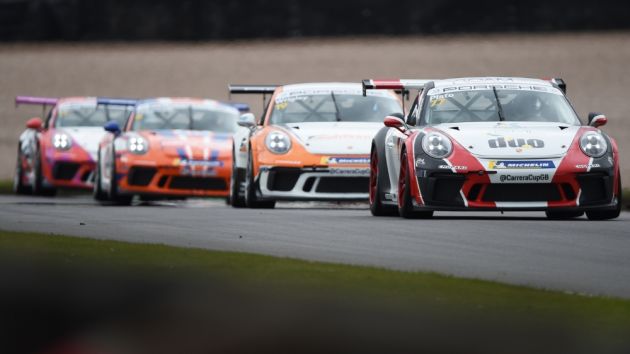 TOCA, organiser of the British Touring Car Championship (BTCC), has agreed a three-year extension that will see the Porsche Carrera Cup GB and Sprint Challenge remain on the support bill until 2026.

The 2023 campaign will mark 20 years since the Porsche Carrera Cup GB joined the bill, and the new three-year deal includes a one-year extension option.

There will also be an increased presence for the Porsche Sprint Challenge GB in 2023, with the single marque GT championship becoming a regular on the support package for the next three years.

“Having already announced that the Porsche Sprint Challenge GB would be expanding its presence on the BTCC support bill in 2023, I’m delighted to further cement its future and that of the Porsche Carrera Cup GB as it celebrates its 20th anniversary,” said Alan Gow, chief executive of the BTCC.

“This new contract underlines how the Porsche GB and TOCA partnership keeps going from strength to strength and, with both championships having already provided highly entertaining races for fans both trackside and at home via ITV’s free-to-air coverage, I’m very much looking forward to continuing our close relationship.”

James MacNaughton, Porsche GB marketing manager, added: “Porsche is delighted to further strengthen its relationship with TOCA. The TOCA package has been home to Porsche Carrera Cup GB since its inception 20 years ago and, from 2023, Porsche Sprint Challenge GB will also race exclusively alongside the BTCC – and at four events we will showcase both championships on the same billing.

“The TOCA platform really is a modern sporting phenomenon, delivering exciting action on track, exceptionally strong crowds across each race weekend, incredible live TV coverage and broad media appeal. We extend our thanks to Alan Gow and his team in fostering our continued relationship.”