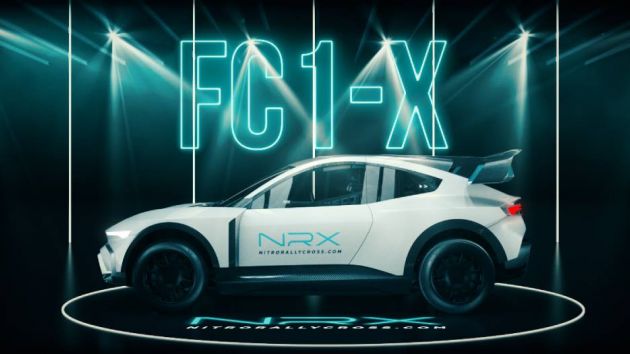 Nitro Rallycross (NRX) has unveiled its brand new FC1-X car, which will compete in its electric supercar class from the 2022 season.

The FC1-X features an engineered aerodynamics package designed so drivers are able to make quick changes to their styles and tackle NRX's jump obstacles.

Additionally, the car boasts 1,000 peak horsepower and can accelerate from nought to 60mph in less than 1.5 seconds, which makes it quicker than a Formula One car.

NRX has also announced that the electric supercar class will be named 'Group E' after the legendary Group B rally class that competed during the 1980s.

Running its first races in 2018, NRX is setting a new standard for rallycross with its daring jumps and varied surfaces. The series is set to run its first full season in 2021 on tracks around the US before expanding to Europe and the Middle East in 2022.

"With the FC1-X, our goal was to create the toughest and fastest Rallycross car ever built for competition," said Travis Pastrana, creator of NRX.

"A car that will be able to excite the drivers and the fans while withstanding the toughest tracks in motorsport. That’s a tall order, but after having the opportunity to work with the best in the business we’re excited to see the results.

"Group B cars were the baddest cars ever rally’d. With that in mind, we are proud to name this new era of car, Group E. With more torque, acceleration and top speed than any current rallycross supercar, you have to see it to believe it."