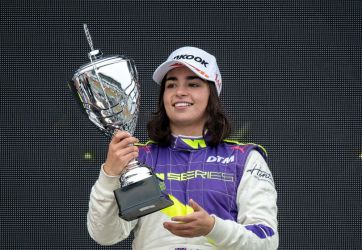 W Series, the all-female motor racing championship, has signed a deal with US broadcasting giant NBC Sports to show every remaining race of the series’ first season.

This latest broadcasting deal follows W Series’ other multiple media rights agreements for its inaugural season. Earlier this month, the championship secured deals in 36 markets worldwide, including Asia, Africa and Oceania. Broadcast partners for 2019 include Fox Sports Asia and free-to-air broadcaster Channel 4 in the UK.

With NBC now on board, it takes W Series’ potential broadcast reach to 130 million households in 57 global territories.

Catherine Bond Muir, chief executive of W Series, said: “We are making history each time our W Series drivers – 20 of the world’s fastest female drivers – line up on the grid.

“So, it’s important we make this incredible show available to as many fans as possible from all around the world, and we are delighted to add NBC Universal to our growing portfolio of leading broadcast partners for this important global market.”

“We are thrilled to have the opportunity to add more women’s sports and racing to our portfolio, and continue to give our consumers new and exciting content to enjoy.”

On the track, W Series is two rounds into its first season, with Jamie Chadwick and Beitske Visser winning in Germany and Belgium respectively. The next race take place in Italy on 9th July, with the series concluding at Brands Hatch, in the UK, on 11th August.