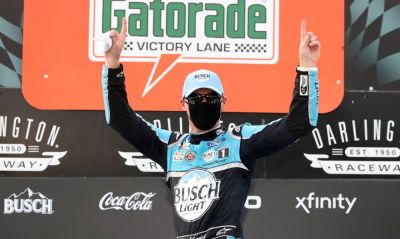 The return of  Nascar's North American stock car racing series on 17th May delivered an average audience of 6.32 million viewers for US broadcast network Fox.

According to Nielsen Media Research, the viewership figure for the Real Heroes 400 at Darlington Raceway was up 38 per cent on the FanShield 500 in Phoenix, the last race to take place before the series was paused due to the coronavirus pandemic.

All told, Fox said it was the most watched Nascar Cup Series race outside of the flagship Daytona 500 since the Folds of Honor Quik Trip 500 in March 2017.

Fox’s coverage of the race, which was held behind closed doors, also saw 47 per cent more men between the ages of 18 and 34 tune in compared to the last event before the shutdown. Other than the Daytona 500, it was Nascar’s biggest viewership for that demographic in three years.

The figure means that the Nascar Cup Series is averaging 5.83 million viewers in 2020, which represents a two per cent decrease compared to last year but comes despite the interruption of the season and a rain-affected Daytona 500.

The Nascar broadcast capped a positive weekend for Fox, which also saw its coverage of the resumption of German soccer deliver the three highest-rated Bundesliga games ever on Fox Sports One.

Michael Mulvihill, executive vice president at Fox Sports, added that the network’s broadcast of Borussia Dortmund’s 4-0 win over Schalke earned a .33 overnight rating, which was a 725 per cent increase on the last Bundesliga game shown by the broadcaster before the shutdown.