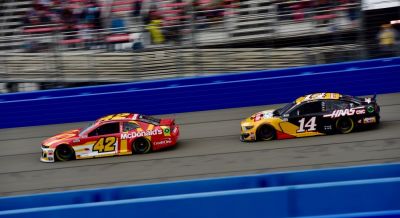 Nascar is planning to be back in action towards the end of May behind closed doors, the US stock car racing series has announced.

It has been reported that the Coca-Cola 600 at Charlotte Motor Speedway on 24th May will be the first race to return, albeit without spectators. It comes as Nascar also postponed its race at Martinsville Speedway in Virginia, scheduled for 9th May.

To date, the series has postponed eight races so far this season due to the coronavirus pandemic.

‘Our intention remains to run all 36 races with a potential return to racing without fans in attendance in May at a date and location to be determined,’ Nascar said in a statement.

‘The health and safety of our competitors, employees, fans, and the communities in which we run continues to be our top priority. We will continue to consult with health experts and local, state and federal officials as we assess future scheduling options.’

In March, the organisation's president Steve Phelps had said Nascar planned to run all of its Cup Series points races and the non-points All-Star race this campaign, even if that required scheduling weekend doubleheaders or adding Wednesday night races.

With no real-life action, Nascar is one of several racing series, including Formula One and Formula E, to turn to esports, which has performed well. The eNascar iRacing Pro Invitational Series race on 29th March alone pulled in 1.3 million total viewers across Fox and FS1 to become the highest-rated televised esports event ever.