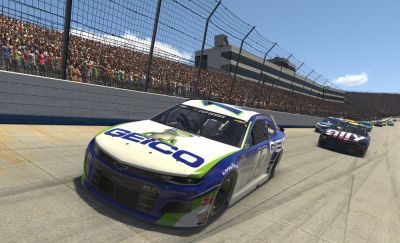 Fox Sports’ televised coverage of the inaugural eNascar iRacing esports series has averaged more than 1.1 million viewers in the US, with audience numbers remaining consistently above 900,000 since its launch on 22nd March.

With the coronavirus pandemic preventing the US stock car racing series from holding events, the broadcaster has aired six virtual eNascar races via its FS1 linear channel, as well as its digital platforms, as part of its domestic broadcast deal.

Nascar was one of the first rights holders in motorsport to introduce a new virtual series, with others having now also done so.

So far, Fox’s largest audience during its eNascar iRacing broadcasts came during the series’ second instalment on 29th March as 1.353 million tuned in to watch professional drivers and gamers go head-to-head on the virtual Texas Speedway.

That event broke the series’ previous record for a televised esports event, which was originally held by the virtual Homestead-Miami Speedway, having drawn 910,000 viewers to FS1 a week earlier.

Round six of the iRacing series was held from Dover International Speedway’s virtual Monster Mile on 3rd May, and was also broadcast on FS1 and the Fox Sports app.