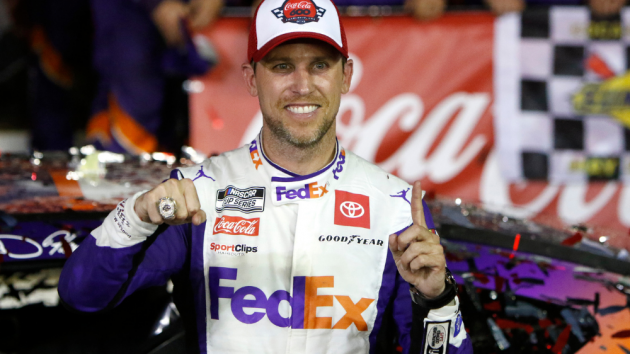 Nascar driver and 23XI Racing co-owner Denny Hamlin has said that further investment in the team is “on hold” unless the American stock car series changes its business model.

Hamlin became a co-owner of 23XI Racing in 2021, joining National Basketball Association (NBA) icon Michael Jordan. His main gripes with Nascar centre around the cost of operating a team in the Cup Series, as well as whether or not teams will secure a bigger chunk of money from the series’ next media rights deal.

At the moment, only 25 per cent of Nascar’s media revenue goes to race teams, while 65 per cent goes to the tracks and ten per cent to the sanctioning body. Teams currently rely on sponsorship for about 75 per cent of their revenue.

Speaking to Sports Business Journal (SBJ), Hamlin said: “The things we did 15-20 years ago are not the things you have to do now.

“I’m not saying I’m always right. Sometimes in retrospect months or years later I’m like, ‘Eh, I don’t know if that was completely right’. But at the same time, I’m passionate about it. I really want this sport to take off.”

He continued: “It’s very hard to convince dinosaurs they must eat differently. I want change. If we’re going to appeal to a new audience because our [current] audience is aging or has aged, you’ve got to get with the times.”

Hamlin has not hidden his displeasure with the direction of the series before, criticsing the coverage of the rain-delayed Bristol Motor Speedway on Twitter.

Tell me why they changed the scoring before the green in stage 2 then. (99-1-14 stayed out).That’s why teams and driver are confused. How do you expect ppl at home to know wtf is going on if the story tellers on TV don’t know. https://t.co/lQ3pvk8oku pic.twitter.com/nuFQu8LokX

Furthermore, at a recent team owner council meeting, Hamlin voiced his concerns about the governing body’s involvement in the new Hendrick Motorsports team set to enter Nascar in 2023. The 41-year-old also questioned why he only found out about the move over social media, instead of being informed personally.

“I will go on the record saying that I had a meeting with Jim France [Nascar’s chief executive] and my message was clear that we need to stop talking about cutting,” said Hamlin.

“Cutting does not equal growth. If we start working collectively then we can grow this sport together. But the business model will have to change for that to happen. We at 23XI have big plans, but those plans are on hold until we see change.”