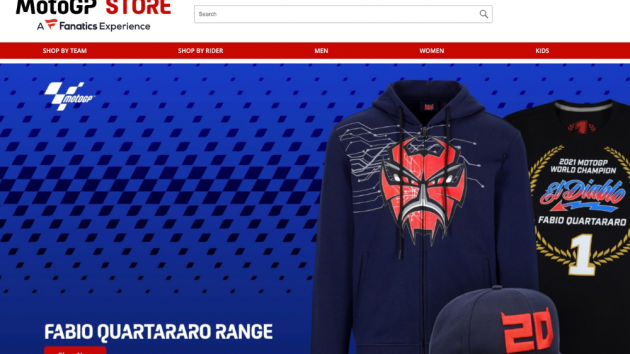 The deal sees Florida-headquartered Fanatics acquire MotoGP’s exclusive global ecommerce rights, as well as obtaining the licence to create official apparel, which Dorna said will increase the range of merchandise available to fans.

Fanatics already has a similar deal with Formula One, which was initially signed in 2017. The pair extended their collaboration in June of last year following a 40 per cent growth in sales in 2020. Fanatics’ expansive partnership roster beyond motorsport includes the National Football League (NFL), the National Basketball Association (NBA) and English soccer giants Manchester United.

“We're delighted to partner with Fanatics to revolutionise the shopping experience for our fans around the world,” said Marc Saurina, senior director of global commercial partnerships at Dorna Sports.

“The new store looks incredible and we look forward to working together on creating an even wider range of MotoGP merchandise, with something for every fan. With our sport enjoying such a global audience, Fanatics is the perfect partner for MotoGP thanks to their global presence and vast experience.”

“With our experience, global capabilities and passion to serve fans with the merchandise they want, when they want it, MotoGP fans will enjoy an assortment of quality products, wherever they are shopping in the world.”