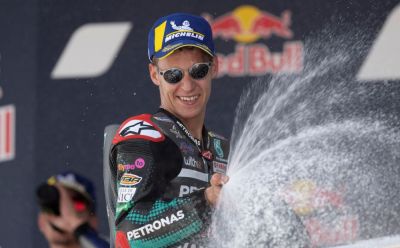 The BMW M Grand Prix of Styria and the Gran Premio Michelin de Aragon will now air on RTVE in 2020, alongside comprehensive non-live coverage of the whole 2020 season in analysis and round-up programming. DAZN, as the principal broadcast partner, will continue to air all 16 races this year.

For the Styrian and Aragon Grands Prix, the Teledeporte channel will show live Friday and Saturday free practice sessions, with MotoGP and Moto3 qualifying shown on La 1 and Moto2 on Teledeporte.

On race day, warmups will be broadcast on Teledeporte, and the MotoGP, Moto2 and Moto3 races will all be shown on La 1. Each and every session of the two Grands Prix, from practice to race, will be broadcast live on the respective channel.

The Styrian Grand Prix race weekend is due to take place from the 21st to the 23rd August, and the Aragon Grand Prix from 16th to 18th October.

MotoGP’s delayed season finally got underway on 19th July in Jerez, with Frenchman Fabio Quartararo winning his maiden race. The series will stay in Jerez for the Andalusia Grand Prix on 26th July.