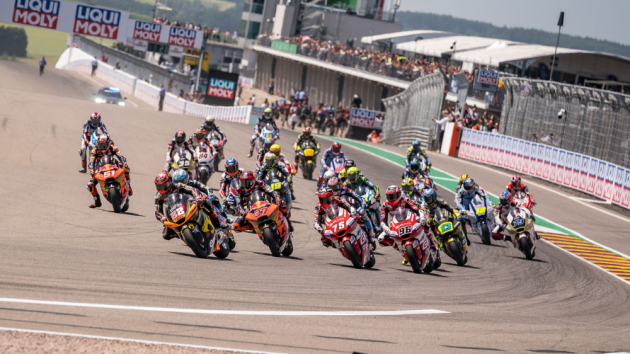 The new four-year agreement guarantees every premier class race will be shown live from 2023 to 2026, securing the future of FTA coverage in one of the biggest and most passionate markets for MotoGP.

Trans7 is one of MotoGP’s longest-standing broadcasters, having already been a partner of the world’s fastest motorcycle racing championship for two decades. This four-year contract renewal takes the collaboration to near the quarter of a century mark, and is announced in the year the new Pertamina Mandalika International Circuit debuted on the MotoGP calendar.

The Pertamina Grand Prix of Indonesia saw MotoGP return to race in the country for the first time in 25 years, with a brand new home welcoming the sport to the island of Lombok.

Trans7 created bespoke coverage of the event and the live broadcast of the MotoGP race achieved an incredible 40 per cent audience share in Indonesia.

Now confirmed as the home of FTA MotoGP coverage in Indonesia for another four years, Trans7 will continue to bring the best of the sport to the millions of fans in the country, with every MotoGP race shown live, coverage of qualifying, and shoulder programming.

Nur Wahyuni Sulistiowati, chief executive of Transmedia, parent company of Trans7, said: "As a country with the biggest number of fans of MotoGP, we are proud that since 2022, Indonesia has officially become one of the hosts of MotoGP.

"MotoGP has always been one of the most anticipated sports programs in Indonesia. It is of utmost pride and pleasure for Trans7 to have been the official broadcaster of MotoGP in Indonesia for over two decades. We are delighted to renew our agreement with Dorna for another four years of exclusive MotoGP World Championship broadcasting."

Manel Arroyo, chief commercial officer of Dorna Sports, added: "We’re excited to sign a new agreement with Trans7 for another four years, guaranteeing the best possible free-to-air coverage for our fans in Indonesia.

"Trans7 have trusted and invested in our sport for many years, helping us to build this incredible audience and provide one of our biggest markets with the quality coverage they deserve. With 40 per cent of the country tuning in to watch the Indonesian GP on Trans7, there could be no better proof that the FTA coverage of our sport is in the best hands possible in Indonesia."