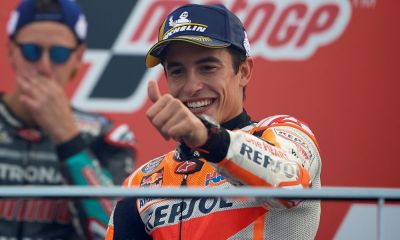 The 2019 MotoGP season, which saw Spain’s Marc Márquez secure his sixth riders’ championship, was the first to air on DAZN since the over-the-top (OTT) broadcaster pocketed rights to the series as part of its Spanish launch.

DAZN did not disclose the precise average live audience figures for the 2019 FIM MotoGP World Championship, but Palco23 reports that the 2018 season on pay-TV channel Movistar achieved an average of more than 300,000 viewers. The Nielsen data cited by DAZN did not account for races in Argentina and Valencia.

All told, DAZN said its subscribers consumed just under 22.5 million hours of MotoGP content, the equivalent of 2,561 years.

The most watched race on DAZN was the Grand Premi de Catalunya in Barcelona in June, while the ten provinces that followed MotoGP the most on the platform were Madrid, Barcelona, Valencia, Alicante, Seville, Bizkaia, Malaga, Asturias, Gipuzkoa and Murcia.

“The World Championship has had an exceptional reception on the platform,” said Veronica Diquattro, executive vice president of DAZN for southern Europe. “When we arrived in Spain we did it to bring the sport closer to the fans and improve the monitoring of the competitions and, after nine months, the average audience of the live competition has grown by 11 per cent compared to the previous season.”

Diquattro added that DAZN has already run tests with MotoGP rights holder Dorna Sports to improve its product for the 2020 season.

According to data from DAZN’s first season of coverage in Spain, 58 per cent of MotoGP content was consumed on smart TVs, compared to 26 per cent on mobile phones and 16 per cent on computers.

“This year's audience figures certify the high impact of the MotoGP World Championship in our country,” added Manel Arroyo, Dorna’s director general. “Few sports, only football, currently have higher performance in Spain. On the other hand, our audience shows us the acceptance of new habits to follow the sport. And as proof of this we have the high acceptance that video on demand is having.”

DAZN is available in Spain for €9.99 per month or € 99.99 annually. As well as MotoGP, its offering also includes English soccer’s Premier League and the FA Cup, as well as basketball’s EuroLeague and the Ultimate Fighting Championship (UFC).