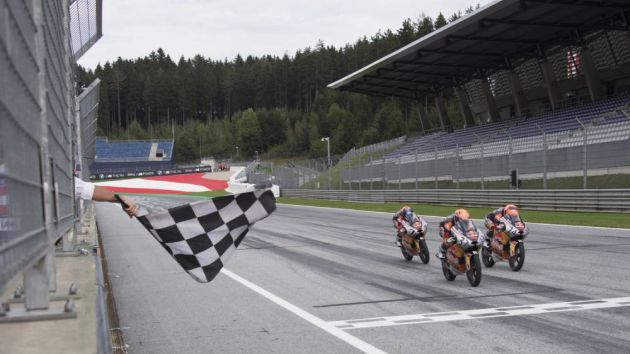 Global motorcycling series MotoGP has revealed that its two rounds at the Red Bull Ring in Austria will allow full capacity crowds.

The races, set to take place in August 2021, will be the first MotoGP rounds to allow full attendance since the outbreak of the Covid-19 pandemic in March 2020.

A second race, the Styrian Grand Prix, was added to the MotoGP calendar in May in place of the cancelled Finnish race at the KymiRing circuit.

Dorna Sports, the MotoGP series owner, will allow fans to attend the events if they have been vaccinated, can provide a recent negative test or have previously had Covid-19 and recovered.

‘Dorna Sports is delighted to confirm that both the Michelin Grand Prix of Styria and the Motorrad Grand Prix von Österreich will welcome fans back to the grandstands in 2021,’ a statement from Dorna read.

‘Spectator restrictions are being lifted at sporting events in Austria this summer, and the gates of the Red Bull Ring will therefore be open to MotoGP fans who are either vaccinated, tested or recovered from Covid-19.

‘Fans will be able to attend the emblematic Spielberg venue at full capacity for both the Styrian and Austrian Grands Prix.’

The Catalan Grand Prix, which took place on 6th June, allowed attendance at a 20 per cent capacity.