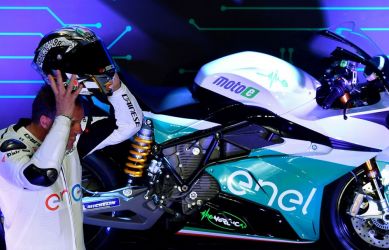 MotoGP has rescheduled testing for its inaugural MotoE World Cup season less than three months after the all-electric motorbike series’ entire roster of bikes were destroyed in a fire.

Organisers were forced to postpone the six-race series, when a fire caused by a faulty charging station ripped through a newly-built E-paddock at the Circuito de Jerez, 90km south of Seville, following the first day of pre-season testing in March.

The series’ opening weekend, which was due to take place in Jerez on 5th May, has been moved to the Sachsenring course in Germany on 7th July, with testing set to take place 17th and 19th June at the Circuit Ricardo Tormo, in Valencia.

In a statement, MotoGP said: ‘After a fire that sadly destroyed much of the material for the FIM Enel MotoE World Cup, the race was on to get the inaugural season back on track as soon as possible.

‘Incredibly, with the support of suppliers, Energica (the series official motorcycle supplier) are expecting to have built all the machinery for the season in less than three months. Thanks to an incredible push from all those involved, MotoE is ready to race.’

The season’s second round will take place at the Red Bull Ring in Austria from 9th to 11th August, with the third and fourth races being held in Misano, Italy from 13th to 15th September.

The series will then return to Valencia for its conclusion, with two races to be held at the Circuit Ricardo Tormo from 15th to 17th November.