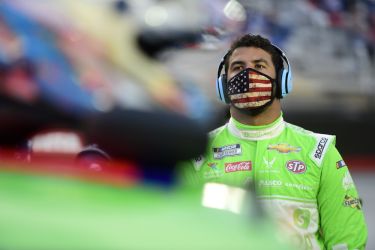 The former Chicago Bulls star’s team will run a single car in the top-tier Nascar Cup Series that will be driven by Bubba Wallace (pictured), currently the stock car racing series’ only black driver.

Wallace, who has made 105 career stars at Nascar’s top level, announced earlier this month that he would leave Richard Petty Motorsports at the end of the current season, despite being offered an ownership stake in the team.

Hamlin, a close friend of Jordan’s who has represented his Jordan Brand through a personal endorsement deal, will serve as a minority owner of the new outfit whilst also continuing to drive for his current team, Joe Gibbs Racing.

Jordan, the current owner of the National Basketball Association’s (NBA) Charlotte Hornets, said he will use his ownership of the Nascar team to “educate a new audience and open more opportunities for black people in racing”.

“Growing up in North Carolina, my parents would take my brothers, sisters and me to races, and I’ve been a Nascar fan my whole life,” the six-time NBA champion, 57, added in a news release.

“The opportunity to own my own racing team in partnership with my friend, Denny Hamlin, and to have Bubba Wallace driving for us, is very exciting for me.

“Historically, Nascar has struggled with diversity and there have been few black owners. The timing seemed perfect as Nascar is evolving and embracing social change more and more.”

Jordan’s ability to enter Nascar comes after he agreed to purchase a Cup Series team charter from Germain Racing. Further details regarding his team’s identity, including its name, manufacturer affiliation, car number and sponsors, will be announced in due course.

Wallace, 26, has been a prominent voice in the fight for racial justice and social change in the US and has repeatedly expressed his support of the Black Lives Matter (BLM) movement. Earlier this year, he successfully campaigned to have the Confederate Flag banned from Nascar races.

“This is a unique, once-in-a-lifetime opportunity that I believe is a great fit for me at this point in my career,” said Wallace. “Both Michael and Denny are great competitors and are focused on building the best team they possibly can to go out and compete for race wins.

“I’m grateful and humbled that Michael and Denny believe in me and I’m super pumped to begin this adventure with them.”