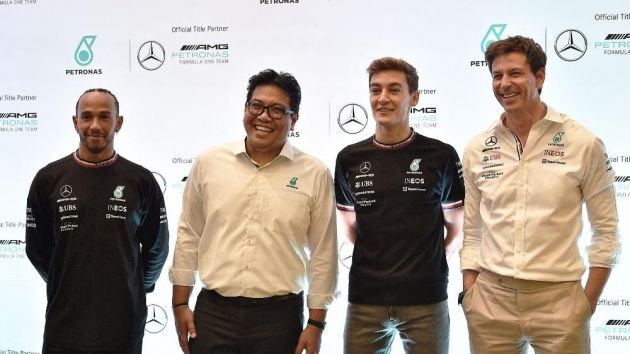 The Mercedes Formula One team and Petronas have announced a multi-year extension of their title sponsorship deal, with the early renewal taking the contract past its current 2026 expiration.

As part of the deal, the two parties will work towards the 100 per cent sustainable fuel due to debut in the global motorsport series in 2026.

The new engine regulations will also see 50 per cent electrification of the power unit, so the early renewal allows for a more focused approach without the distraction of contract negotiations behind the scenes.

The partnership, which began upon Mercedes’ entry into Formula One in 2010, will also expand to include a greater focus on new sustainable technology solutions beyond the racetrack. It has been previously reported by Forbes that the agreement is worth US$75 million.

The Brackley-based outfit has already made numerous strides in this direction, including plans to use Sustainable Aviation Fuel (SAF) for its air travel and Hydrotreated Vegetable Oil (HVO 100) biofuel for its road freight in a bid to lower its CO2 emissions on the path to being net zero carbon by 2030.

“We are doing something a little bit unusual – announcing a partnership that will begin in four years’ time,” explained Toto Wolff, Mercedes Formula One's team principal.

“This sends an important message: our team and Petronas are no longer just partners, we are family, and we will be one team for many more years to come.

“From 2026, advanced sustainable fuel will be at the heart of Formula One performance – and this gives us a fantastic opportunity to demonstrate our expertise in this domain, through both the power unit and Petronas Fluid Technology Solutions.

“We are excited to be racing into the future alongside Petronas, with the ambition to set the standard once again, in our on-track performance and by pioneering the transition of a global sports team to a net-zero future.”

“Petronas is an important part of our heritage and history, and we're delighted that they will continue as our title and technical partner long into the future,” added Richard Sanders, Mercedes Formula One's commercial director.

“The partnership with Petronas will now span two decades and we look forward to making this the most enduring and successful sponsorship in elite global sport.”

Malaysian oil and gas company Petronas is already supporting Mercedes and their customer teams with advanced sustainable E10 fuel as standard for the current engine regulations, and it is making further investments to ensure it is ready for the future.

“In that same vein, we are already on track with developing a greenfield biorefinery and co-processing at our facilities to supply [SAF] as a cleaner and more viable option for aircrafts in our effort to support the aviation industry needs," said Datuk Sazali, executive vice president and chief executive of Petronas Downstream.

This is in line with Carbon Offsetting and Reduction Scheme for International Aviation (CORSIA) which is expected to come into mandatory effect by 2027 as well as the International Automobile Federation’s (FIA) net zero by 2030 commitment – both of which will affect the logistics operations of Formula One teams.