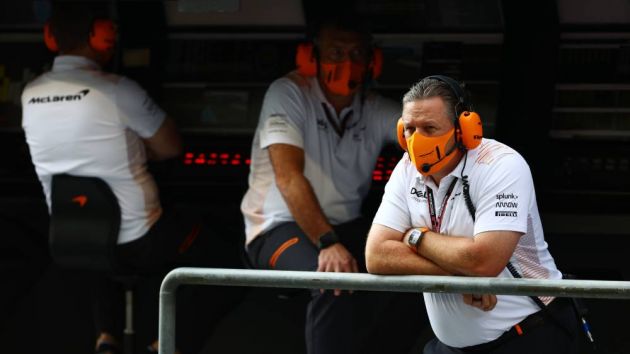 McLaren Racing have held talks with the Volkswagen Group about a possible Formula One entry, the team’s chief executive Zak Brown has said.

Volkswagen-owned Audi and Porsche have been linked to a possible Formula One entry in 2025 or 2026 after they joined engine discussions alongside existing teams in June 2021.

Additionally, Porsche's motorsport managing director Thomas Laudenbach commented that the manufacturer is 'seriously considering' a Formula One entry and is expecting to make a decision soon.

Brown has now confirmed he has held talks with Volkswagen but stated that nothing has been agreed. He even indicated that Porsche could link up with rival team Red Bull Racing in the future.

"I am hearing [Volkswagen] are going to do something with Red Bull on the Porsche front," Brown told reporters at the McLaren Racing factory.

"I think they’ve spoken with a handful of people on the grid and as you would imagine we have had conversations but in the short term and medium term we’re very happy where we are.

"I think that’s not been definitively decided and if they do [enter], we have a contract [with Mercedes] through this term.

Brown is not expecting McLaren’s supply deal with Mercedes to change until the next generation of Formula One engine is introduced in 2026.

The new format was a hit among fans and sponsors and Formula One agreed to expand the number of sprint events to six for the 2022 season.

However, eight out of the ten teams are yet to agree on details to ensure the events happen, with some wanting more money.

Formula One agreed a financial deal in 2021 to provide teams with a bonus to offset any damage caused by the sprint events.

Despite this, according to Brown, some bigger teams are pushing for more money in the budget cap, which is set at US$140 million for 2022.

"A couple of teams, and one team in particular, wanted a US$5 million budget cap increase, which was just ridiculous," Brown said.

"And no rational facts behind it. When you challenged them, they go to what if and could and you've got to anticipate. You sit there and go 'This is just nonsense'.

"Maybe there can be a compromise raised and we raise it a little bit, and we start in 2022 or we skip 2022, and a couple of these teams should have to explain to the fans why there is no sprint races."