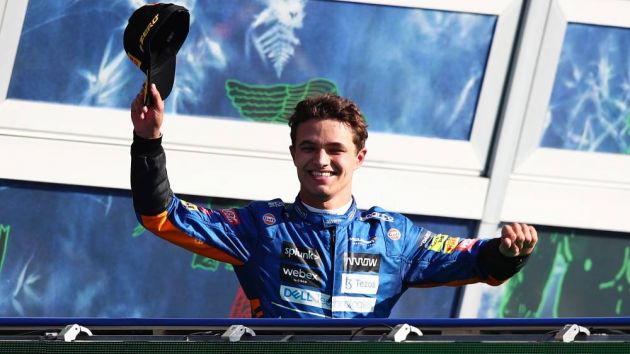 Medallia will act as the team's ‘official feedback partner’ from the upcoming US Grand Prix onwards.

As part of the agreement, Medallia will capture customer and employee insights for McLaren Racing, providing a selection of solutions to the team.

In addition, Medallia will receive branding on McLaren Racing's MCL35M car for the US Grand Prix, and then on the rear wing of the cars and on the pit crew helmets from the 2022 season onwards.

"We are delighted to announce our partnership with Medallia ahead of the US Grand Prix," said Zak Brown, chief executive of McLaren Racing.

"This partnership brings a high level of expertise to our knowledge of our fans and our people at McLaren Racing.

"Our fans and people are two vital elements of our team and having a partner that can assist in refining these experiences will continue to improve how we serves our growing fan base and help us improve our culture."

McLaren Racing have also agreed a multi-year extension to their existing partnership with Dell Technologies.

Additionally, McLaren Racing and Dell Technologies will develop the team's high performance computing (HPC) capabilities. This element of the partnership has been designed to help McLaren Racing improve the aerodynamic performance of their cars.

Elsewhere in Formula One, Williams Racing have announced a new regional partnership with Mei Rigging and Crafting, a sister company in the portfolio of the team's owner, Dorilton Capital.

Covering the US market, the agreement will see Mei Rigging and Crafting's branding feature on the engine cover of Williams Racing's F43B at the upcoming US Grand Prix.

"As this new chapter for Williams continues to evolve, we are proud to be working with Mei in this new partnership," said James Bower, commercial director for Williams Racing.

"We look forward to developing the relationship and working alongside their teams across the US as they continue to expand and work towards their goals."