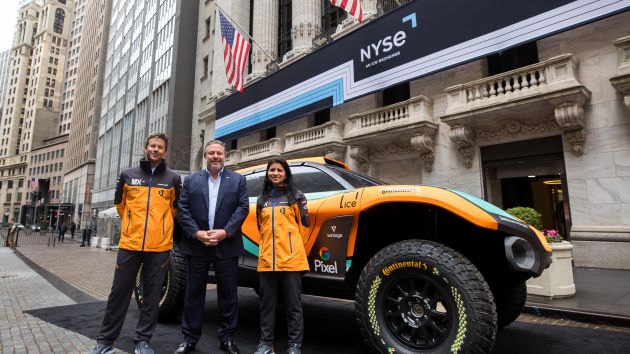 The Extreme E car sat just feet away from the Fearless Girl statue, installed in New York City ahead of International Women’s Day in 2017. Representing the role of women in leadership, the statue mirrors the values of the Extreme E race series which mandates male and female driver line-ups, as well as McLaren’s and ICE’s commitment to accelerating diversity, equality, and inclusion.

ICE’s partnership with the McLaren MX Extreme E team is the next chapter in a growing relationship in which Zak Brown is currently appearing in an ICE advertising campaign - 'Make the Connection' - focusing on using data as a competitive advantage.

From the 2022 Extreme E season, ICE’s logo will be displayed on the chassis side and roof of the McLaren MX Extreme E car, and on the racing overalls and helmets of Tanner and his team-mate Emma Gilmour, starting with the recent race in Saudi Arabia.

“Partnering with a leading global name in financial markets like ICE is a fantastic moment for McLaren Racing," said Brown. "Like us, ICE targets authentic brand engagement driven by data and technology, and we look forward to joining them at the New York Stock Exchange to celebrate this new partnership.

“ICE aligns with our commitment to sustainability, including DE&I. This makes Extreme E a perfect platform to carry our partnership and raise awareness of the impact of climate change, while promoting a more level playing field for gender equality.”

“I’ve been a fan of Zak Brown and McLaren Racing for years, and our team could not be more excited about becoming an Official Partner of the McLaren Extreme E Team," said Jeff Sprecher, founder, chair, and chief executive of ICE.

“ICE and McLaren are both driven by the use of data and technology to create competitive advantage. We look forward to collaborating with McLaren Racing, not only to make an impact in the thrilling all-electric Extreme E championship, but also to join the leadership effort in the development of sustainable technology.”