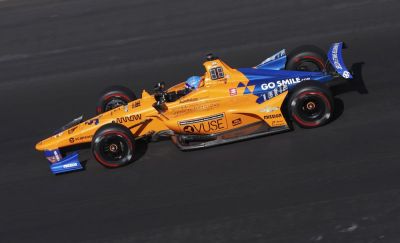 Motorsport’s McLaren Racing have announced they will return to full-time IndyCar competition from 2020 in a strategic partnership with Arrow Schmidt Peterson Motorsports (Arrow SPM) and Chevrolet.

McLaren last competed full-time in IndyCar in 1979 but now return under the Arrow McLaren Racing SP name and will field two Chevrolet-powered cars in the 2020 NTT IndyCar Series, with Arrow Electronics as the team’s title partner, as well as a new manufacturer partnership with Chevrolet.

The partnership will see the infrastructure of Arrow SPM underpin the team’s operations, while McLaren will add technical expertise, commercial experience and marketing knowhow. Arrow SPM co-founders Sam Schmidt and Ric Peterson will continue in their current ownership roles.

Zak Brown, the McLaren chief executive, said: “IndyCar has been part of McLaren since our early years of racing, and the series today provides not only a commercial platform to continue to grow our brand in North America, but competition with some of the best teams in international motorsport.

“This team provides McLaren with the right synergy as a strategic partner for our return to the sport. We believe together we can help each other achieve our mutual ambitions. Sam Schmidt and Ric Peterson have built a solid foundation and we look forward to working together to take the team to the next level.”

Schmidt added: “I’m extremely proud of the team that Ric and I have built and that a legendary brand like McLaren Racing has decided to partner with us to form Arrow McLaren Racing SP to continue our march to the top of IndyCar.

“Arrow is a tremendous partner which has been integral to our growth as a team since 2015 and to the creation of this new partnership. The combined technical resources and commercial opportunities both McLaren and Arrow bring to the table provide a winning combination.”

McLaren Racing’s sporting director, Gil de Ferran, will lead the McLaren IndyCar programme and involvement in Arrow McLaren Racing SP. He will helm a dedicated group from McLaren Racing, independent of the Formula One team.

The announcement follows McLaren’s one-off entry earlier this year at the Indy 500 as the UK-based team sought to help Fernando Alonso secure motorsport’s ‘triple crown’. The bid was not successful, with Alonso failing to qualify.