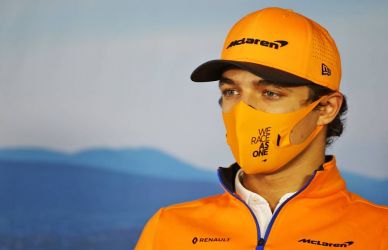 McLaren Racing and Gulf Oil have announced a multi-year strategic partnership which will see the brand become the Formula One team's preferred lubricant supplier.

The company’s branding will be integrated into McLaren’s physical and digital assets from 31st July at the British Grand Prix. Gulf’s logo will be visible throughout the 2020 Formula One season, including on the apparel worn by race drivers Lando Norris and Carlos Sainz, as well as the McLaren pit crew. Gulf branding will also appear on the engine covers and wing mirrors of the McLaren MCL35 race cars.

As the preferred supplier on the consumer side, all McLaren Automotive cars will be filled with Gulf Oil and fuel optimised for high performance engines from 2021. Gulf branding will also be displayed at McLaren Automotive’s PURE customer events that take place around the world, at retailers and on team kit.

Mike Jones, Gulf Oil chief executive, said: “This is a very exciting partnership that brings the Gulf brand back into elite motor racing. The history books are full of remarkable tales that tell of what Gulf and McLaren have achieved in the past. Now we are together once more to write the next chapter of this unique partnership.”

Zak Brown, McLaren Racing chief executive, added: “Gulf is part of McLaren’s history and are well-known for their innovation and technical excellence in the industry, with which aligns with McLaren perfectly. We are looking forward to starting our partnership together this season.”

The partnership sees McLaren reunite with Gulf in a partnership that was first struck back in 1968 and continued until the end of the 1973 Formula One season. The partnership was then renewed at the Le Mans 24 Hours in the 1990s, with the famous McLaren F1 GTR running in Gulf colours throughout the decade.