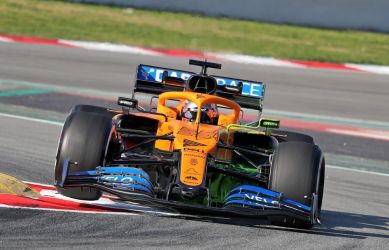 The McLaren Group is considering the sale of a minority stake in its Formula One team in a bid to help raise ‘hundreds of millions of pounds’ to mitigate the financial impact of the coronavirus pandemic, according to Sky News.

Any sale would reportedly involve McLaren parting with between 20 per cent and 30 per cent of its Formula One business, which Sky said would generate ‘tens of millions of pounds’.

McLaren, whose Formula One outfit has won 12 drivers’ championships and eight constructors’ championships since its first entry in 1966, has reportedly considered a deal during discussions with advisers and lenders in recent days.

The idea is reportedly at a ‘conceptual stage’ and is being considered alongside other funding options, including raising capital from existing bondholders. Bankers have yet to be formally appointed to handle the process, the report added.

McLaren's on-track operations, which include its participation in IndyCar’s Indianapolis 500 race, account for roughly 20 per cent of the group's annual revenues.

Despite being one of the most iconic teams on the Formula One grid, the British-based racing outfit have fallen on leaner times over the last decade. Their last drivers’ and constructors’ championships came in 2008 and 1998 respectively. A switch to Renault engines in 2018, following a disastrous partnership with Honda, has seen McLaren make steady progress up the midfield. There is hope a return to Mercedes power units from 2021 can help bring back success.

But with the Covid-19 health crisis prompting financial uncertainty within the sport, a sale of a minority shareholding could help to provide funds to support McLaren’s push to compete for titles once more.

Sky News added that selling a minority stake could help enable McLaren to operate at the level of the new budget cap – lowered to US$145 million for 2021 – on a sustainable basis.

If a sale is sought, McLaren would join fellow British racing outfit Williams on the market, though the latter is reportedly looking to sell its Formula One team outright. Canadian businessman Michael Latifi has emerged as the frontrunner to acquire the struggling team for €135 million (US$151.7 million), according to Gazzetta dello Sport.

For McLaren Group, exploring options over the ownership of its Formula One division form part of a broader attempt to refinance the company. It recorded a UK£133 million (US$166.6 million) loss in the first quarter of 2020 as coronavirus affected its Formula One and road-car operations. The group cut 1,200 jobs last month as part of a restructuring plan.