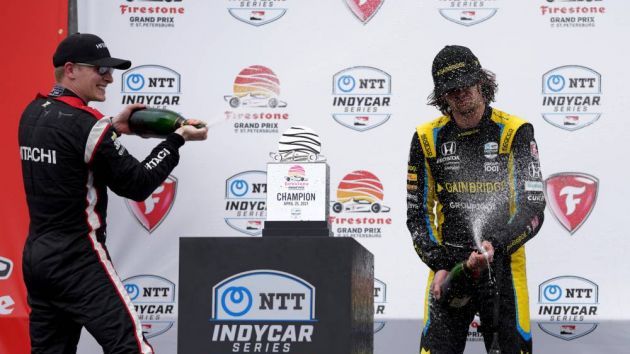 US sports broadcaster NBC Sports has confirmed that the latest IndyCar race from St Petersburg was the most watched series broadcast on its channels outside of the Indianapolis 500.

The Grand Prix of St Petersburg on 25th April reached a total audience delivery (TAD) of 1.22 million, NBC confirmed. This marks an increase from the viewership figures recorded at the season opener at Barber Motorsports Park, Alabama, which reached 921,000 viewers - itself up three per cent on the 2020 equivalent - according to Racer.

IndyCar's growth on NBC Sports is symbolic of constant viewership growth for the American open wheel series. According to IndyStar, the series finished the 2020 season up two per cent on NBC's TV ratings in comparison to 2019.

The 2021 IndyCar season marks NBC's third season as the exclusive broadcaster in its home nation of the US. The three-year deal is set to end at the close of the season.

IndyCar has diversified its driver line-up for the 2021 season, welcoming drivers from different series across the world. Romain Grosjean from Formula One, Nascar superstar Jimmie Johnson and Australian Supercars' Scott McLaughlin.

"Our rookie class is world renowned and we’re excited to welcome those gentlemen in," said SJ Luedtke, IndyCar's vice president of marketing, in a BlackBook interview.

The 2021 IndyCar season continues on 1st May at Texas Motor Speedway.