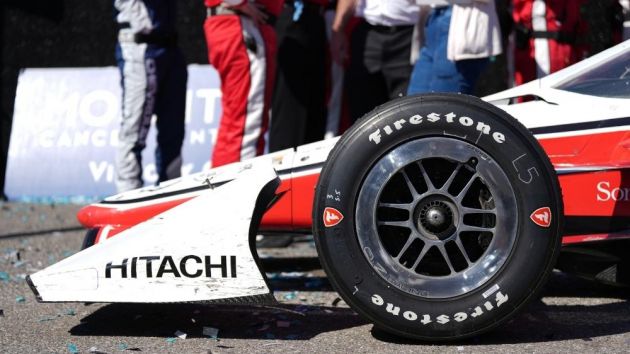 The Penske Entertainment-owned IndyCar series has revealed a host of sustainability initiatives, including efforts to reduce the carbon footprint for this year’s Indianapolis 500.

The elements were announced in collaboration with tyre company Firestone, energy giant Shell and other corporate partners of the American open-wheel series.

It is partially composed of a new sustainable natural rubber derived from the guayule shrub, which requires less reharvesting that traditional sources of rubber.

The tyre will make its official competition debut as the alternate tyre at the Big Machine Music City Grand Prix, held at the Nashville Street Circuit in August.

Furthermore, the race tyres supplied for practice, qualifications and race day at the Indy 500 will be delivered using Penske Truck Leasing’s fleet of electric vehicles. As part of this effort, Shell will assist in the installation of a 150kW, high-powered electric charger on the grounds of the Indianapolis Motor Speedway (IMS).

In addition, the series’ cars will be transported by trucks fuelled by renewable diesels, starting with the Chevrolet Detroit Grand Prix in June.

“This will be the most sustainable Indy 500 in our 100-plus year history,” said Mark Miles, president and chief executive of Penske Entertainment.

“Moreover, through excellent coordination and teamwork with partners who are true innovators in this field, we’re moving IndyCar toward industry leadership when it comes to environmental awareness and impact.”

Like last year, IMS will ensure all electricity consumed throughout the facility in May will continue to be purchased via 100 per cent renewable energy credits.

IMS has also teamed up with Shell and climate technology company Chooose to implement a scheme in which fans can offset their travel footprint through a nominal contribution to the GreenTrees reforestation project. The initiative restores natural habitats in more than one million acres across seven states in the Mississippi Alluvial Valley.

Additionally, IMS will offset its entire carbon footprint during the month of May through its contributions to GreenTrees. Other initiatives next month include increased waste diversion efforts throughout the facility with expanded recycling and food recovery programmes.

IMS’ official retail partner Legends will also open a fully sustainable store inside an electric truck. All items sold will be reusable or designed from recycled plastic bottles.

Last year, the Indy 500 was certified at the ‘Silver’ level by the Council for Responsible Sport after achieving 37 social and environmental standards of good practice.

IMS is now working toward becoming the first sports facility in the world to become a ‘Responsible Sport Certified’ venue.

“The NTT IndyCar Series and its partners are continually evaluating ways to lower our footprint and create a more sustainable future,” said IndyCar president, Jay Frye.

“We’re looking forward to using renewable diesel in our transporters beginning in June and expect to have several more important initiatives to unveil in the near future.”