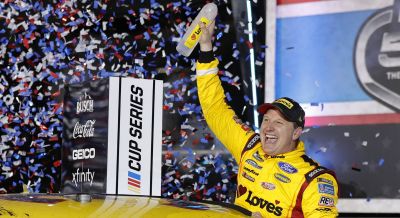 US broadcaster Fox Sports saw another significant drop in viewership for its domestic coverage of the 2021 Nascar Cup Series season-opener, which was marked by a lengthy delay due to poor weather conditions at the Daytona Beach Circuit in Florida.

According to Nielsen data, the event on 14th February brought in a household rating of 2.8 and an average of 4.83 million viewers, a 35 per cent drop from the previous record low 7.33 million in 2020.

In addition to the challenging conditions, the event was tainted by a 16-car pileup which meant the race, which saw Michael McDowell secure a career first victory, did not finish until past midnight.

The disappointing ratings continue a downward trend in Daytona 500 viewership, which has been steadily declining since Fox scored 18.7 million viewers in 2005 with a household rating of 10.9, according to Sportico.

Despite the rain and hailstorm, it is likely the broadcast would have struggled to break the ten million mark, with viewership suffering across sporting events broadcast on major US networks since the start of the pandemic, according to Nielsen data.

Despite the downward trend in household viewing, Nascar has managed to accumulate over 40 sponsors for 2021 and the series' diversity drive has been positively received, with Latinx musician Pitbull and African-American basketball legend Michael Jordan now both co-owning teams.