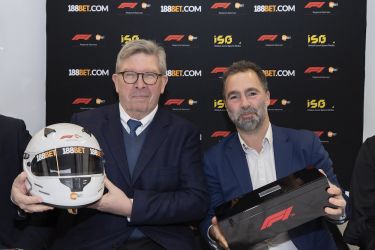 Formula One has formally launched its first-ever betting partnership after announcing 188Bet as an official regional sponsor in Asia earlier this year.

The bookmaker has aligned with the global motorsport series under a five-season agreement brokered by Interregional Sports Group (ISG), the London-based media and marketing agency which secured the global betting rights to Formula One in 2018 as part of a landmark deal worth a reported US$100 million.

188Bet branding will feature exclusively in Formula One broadcasts across the Asian market until 2024 thanks to virtual trackside advertising managed by ISG, while the brand will also receive additional marketing opportunities across Formula One’s digital and social platforms.

ISG’s agreement with Formula One, signed in September 2018, enabled the company to strike a series of separate deals with betting companies in different markets around the world. In addition, the first-of-its-kind partnership saw ISG team up with Sportradar to distribute official data and develop new in-play betting markets during Grands Prix.

The 188Bet deal was officially unveiled on Tuesday during a signing ceremony held at Silverstone Circuit, the historic home of the British Grand Prix, ahead of the first race of the 2020 season in Melbourne on 15th March.

Brawn described the new betting tie-up as “part of a bigger commercial plan” being implemented by series owners Liberty Media to transform Formula One into a more engaging product for new and existing fans.

Speaking to SportsPro, he said such partnerships will open up a wealth of in-race betting opportunities, with possible prop bets including fastest laps, fastest pit stops and number of overtakes, and the potential to create odds and markets around telemetry and driver biometric data.

As it stands, Formula One has no plans to develop an F1-branded betting product, nor will the series offer race odds as part of its F1 TV over-the-top (OTT) service. Live data will instead be distributed to authorised bookmakers and used to enhance TV broadcasts in a more traditional manner.

“We would love to broadcast the bio data, the heart rate of the driver when he’s in a battle with another driver,” said Brawn. “At the moment it’s something which the drivers feel sensitive about and they don’t want broadcast, and I understand that. But that’s the sort of information we’re negotiating with the teams because we’re very keen to engage fans more in the sport, not only from a betting perspective but the overall perspective.

“There’s a huge amount of data in the sport: tyre wear, brake temperatures, engine temperatures, all sorts of things which could be significant for the race. That’s the type of information we want to use to add an extra dimension to the broadcast.”

"A big commitment from F1"

According to Chris Buckley, a non-executive director at ISG, the company’s virtual advertising technology will be a “game-changer” for Formula One, opening up new commercial inventory and making the series “far more interesting” and “far more saleable” to companies across all sponsorship categories.

“It’s a big commitment from F1, they’re absolutely committed for the long-term,” he said of ISG's five-year deal. “They recognise that this isn't going to be a quick win for them; they need to build the value. And F1 will hope that in five years’ time the rights value will be significantly higher than it was when we acquired them.”

Further regional deals are currently being sought with international betting operators, added Buckley, who expects more agreements to be announced before the end of the 2020 season.

“Typically, in any rights cycle, you start to get your value towards the end of the cycle," he said. "This is very new. We knew that it wasn't going to be overnight, we weren’t going to start this first ‘live’ season with every region sold - that was highly unlikely."

While the company is seeking to broker regional betting deals, Buckley noted that all Formula One sponsorships could be sold in future on a more granular basis, enabling partner brands to target advertising towards specific viewer demographics on a market-by-market or even an individual basis.

“Ultimately, that will happen,” he said. “You’ll be watching a Formula One race and if your particular interest is a make of car or a particular holiday destination, you’ll see adverts tailored to you appearing trackside.

“The challenge is not turning the sporting event into an advertising parade. It’s still got to be done in the same way Formula One has approached this, which is still quite sophisticated. But that’s the ambition.”