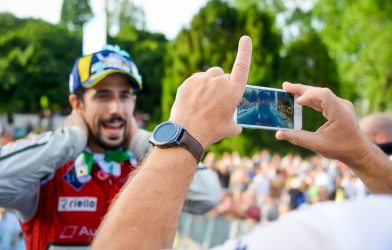 The Formula E all-electric racing series has announced an innovative partnership with video-sharing website YouTube to introduce a ‘first-of-its-kind’ digital product for the upcoming season.

Initially exclusive to the UK, the deal will see Formula E stream all of its races live on YouTube with guest appearances from influencer presenters throughout the course of its fifth campaign.

The move will see popular YouTube content creators such as KSI, who boasts almost 20 million subscribers on the platform, host each show from a bespoke studio in London alongside regular anchor Laurence McKenna.

The list of influencers will be revealed across Formula E digital platforms ahead of each race and will be chosen in collaboration with Goat, the global influencer marketing agency which the series partnered with before the start of last season.

“We always try to push the boundaries of what’s possible at the ABB FIA Formula E Championship - not only developing innovations with the cars on track, but also with our experience and offering to fans trackside, at home and on the move,” said Ali Russell, media and business development director at Formula E.

“Coming together with like-minded companies such as YouTube to provide new ways to watch electric racing is what separates Formula E from other sporting properties and rights-holders. Working in tandem with some of the biggest names and influencers allows us to grow our existing audience, which is primarily a younger and more digitally-engaged demographic. This partnership truly fits their needs and viewing habits.”

Tomos Grace, YouTube's head of sport, EMEA, added: “Seeing YouTube creators centre stage for such an important sporting event is an exciting moment for YouTube. We look forward to working with Formula E on this first-of-its-kind project over the coming months.”

The partnership comes after international broadcaster Eleven Sports appointed YouTube star Spencer Owen to present its UK coverage of Spanish soccer’s El Clásico fixture between Barcelona and Real Madrid at the weekend. Formula E, however, is the first sports property to pencil in YouTube content creators for regular hosting stints.