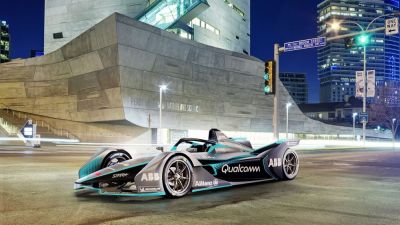 All-electric racing series Formula E has revealed the first complete images of the second-generation car that will be used from the beginning of its 2018/19 season.

The new vehicles, which are designed to be used for three campaigns, will be equipped with almost double the energy capacity and double the range of the current car, enabling the championship’s teams and drivers to complete a full race at higher speeds, without making the mid-race car swaps which have been part of the series since its inception.

The new design incorporates the halo for the first time - the cockpit protection is being rolled out across all new cars competing in FIA-sanctioned series - as well a huge rear diffuser and coverage of the front wheels.

The new-look car was revealed digitally on Tuesday ahead of a physical launch planned for the Geneva motor show on 6th March.

Formula E says the second-generation cars represent the advancements in battery and electric motor technology which will eventually make its way into everyday electric road vehicles.

“This car represents the future of racing,” said Alejandro Agag, founder and chief executive of Formula E. “When we started Formula E, our goal was to break the mould and challenge the status quo - bringing a revolution to motorsport. This next generation car represents that revolution.”

“I'm sure that everyone will be very excited by how futuristic and advanced it is,” said Jean Todt, president of the International Automobile Federation (FIA). “I'm very proud that the FIA has been at the forefront of this car's development. I can't wait to take the covers off the real car when it will be seen for the first time in Geneva on 6th March.”

The new car was produced by Spark Racing Technologies and will be powered by a new McLaren Applied Technologies battery, after the manufacturer beat current battery supplier Williams Advanced Engineering to a deal.

Now in its fourth season, Formula E heads to the Chilean capital of Santiago for the first time ever this weekend, when Swedish driver Felix Rosenqvist will be hoping to extend his championship lead.