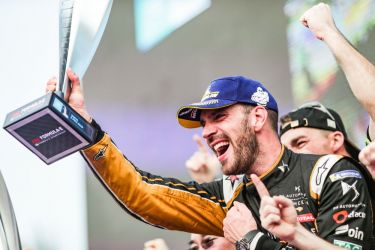 Formula E has made a profit for the first time in its five-year history thanks to new sponsorship deals, according to the Financial Times.

The all-electric racing series had posted losses in each of its first four seasons since its 2014 inception, including last year when it made a loss of €26.4 million (US$29.1 million) despite generating a record €133.4 million (US$147.1 million) in revenue. It even came close to running out of cash during its inaugural championship, only to be kept afloat by investment from Liberty Global and Discovery Communications.

Despite the inauspicious financial start, Formula E’s founder and chief executive Alejandro Agag maintained the series would turn a profit in 2020.

But now it has been reported that the championship has defied that forecast, with the Financial Times citing new corporate endorsements with Bosch, Heineken, Saudi Arabian Airlines and Moët & Chandon as the deciding factors for taking Formula E into the black for the first time.

Speaking to the Financial Times, Agag said the company’s revenues were more than €200 million (US$221 million) in the year to 31st July. He added that earnings before interest, tax, depreciation and amortisation (Ebbtide) for the year were at about €1 million (US$1.1 million). This had been achieved without reducing the group’s marketing budget of approximately €30 million (US$33 million).

Agag declined to provide a full financial breakdown of Formula E’s results, which are yet to be lodged with Companies House. However, he did reveal that sponsorship, which apparently accounts for about half of total revenues, had grown 25 per cent last year.

Agag said: “Reaching break-even is a historic moment for us. For a business that almost didn’t make it after three races, now after 60 races we reach break even — and with strong revenue growth — and that is going to continue.”

He added that sponsors “keep coming, and they keep renewing for longer and longer. What they want, and what they perceive, is that Formula E… is definitely a bet for the future.”

Formula E’s reliance on sponsorship has drawn criticism from major motorsport figures. Chase Carey, Formula One’s chief executive, has described it as a “business-to-business proposition, as opposed to a sport,” suggesting it was a marketing ploy for companies rather than a legitimate sporting event capable of attracting a large fan base.

However, Agag stressed revenues from hospitality, ticketing, media rights and host city fees had all grown over the past year. He also pointed out that Formula E had a cumulative global TV audience of 411 million people last season, a 24 per cent rise from the year before.

“The biggest growth is coming from the consumer side,” he said. “We are definitely diversifying our revenue streams.”

The 2019/20 Formula E season gets underway with the Saudia Diriyah E-Prix on 22nd November.