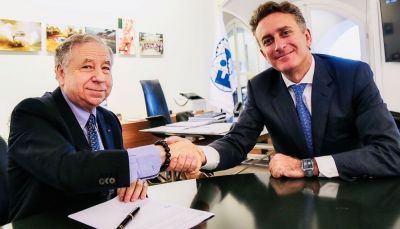 The Formula E all-electric racing series will have world championship status from the 2020/21 season after securing the approval of the International Automobile Federation (FIA), motorsport’s global governing and sanctioning body.

The agreement, which was signed in Paris by Formula E founder and chairman Alejandro Agag alongside FIA president Jean Todt, means the city-based series will transition to the top tier of single-seat motorsport.

The decision will see Formula E, which first raced in 2014, join global motorsport series Formula One as one of two single-seater FIA world championships starting with season seven, when it will officially be known as the ABB FIA Formula E World Championship.

“It was always our ambition to one day become an FIA world championship,” said Agag. “Everything we have done and delivered to this point has been working towards this particular moment in time. Achieving the feat and being granted with FIA world championship status adds more credibility to what is already a fully-fledged formula of racing and a spectacular sporting product.”

He continued: “Now we can say we have done it. But it is only the beginning of a new chapter under the banner of the ABB FIA Formula E World Championship.”

The announcement comes after Agag revealed to the Financial Times in September that Formula E had turned a profit for the first time in its history, owing largely to new sponsorship deals.

The news also follows Formula E’s season-opening double-header in Riyadh, which saw German automakers Mercedes and Porsche join the grid to bring the total number of manufacturers to ten.

The 2019/20 campaign features the series’ biggest ever calendar, with 14 races taking place across 12 cities. The next ePrix is set to go ahead in Santiago, Chile on 18th January.