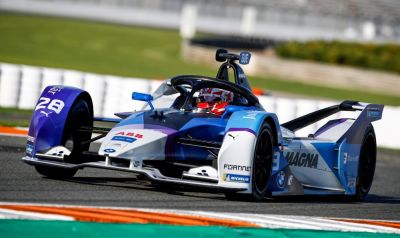 BMW has followed fellow German car manufacturer Audi in confirming that it will no longer race in Formula E after the 2020/21 season.

Audi announced earlier this week that it will be joining the Dakar Rally in 2022, which will replace its factory involvement in the all-electric racing series.

The Ingolstadt-based carmaker has been involved in Formula E since its inaugural season, with its six-year stint delivering one drivers’ championship in 2016/17 and the teams’ title in 2017/18.

Now BMW, which only joined Formula E ahead of the 2018/19 season, has announced that it will also call time on its involvement in the series after season seven.

BMW has enjoyed mixed success in Formula E, winning its debut race as a factory team but adding only three victories since.

In a brief statement confirming its withdrawal, BMW said it had decided to leave the series because it has ‘essentially exhausted the opportunities’ to develop its technologies within Formula E.

Markus Duesmann, Audi’s head of technical development and product lines, gave a similar explanation for his company’s exit, stating: “Formula E has accompanied the transformation phase at Audi. Today, electromobility at the four rings is no longer a dream of the future, but the present.”

The departure of BMW and Audi will leave Formula E with ten teams, including entries from the likes of Mercedes, Nissan and Jaguar.

Reacting to the news, Mercedes motorsport boss Toto Wolff reaffirmed the manufacturer’s commitment to Formula E, but said the series needs to learn lessons and make changes in the wake of BMW and Audi’s decision to withdraw.

“This is a situation that needs to be understood by Formula E and the Formula E organisation,” he told Autosport. “We need to speed up the discussion around cost cap to make it financially more sustainable.