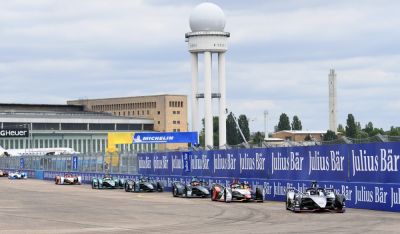 Formula E, the all-electric racing series, has announced that it will complete its 2019/20 season with six behind-closed-door races taking place across just nine days in Berlin.

The International Automobile Federation (FIA) has given the green light for the site of the German capital’s former Tempelhof Airport to host three double-headers, starting from 5th and 6th August. Subsequent races will then be held on 8th and 9th August before the season reaches its conclusion with a pair of showdowns on 12th and 13th August.

Formula E completed five races before its sixth season was put on hold in March due to the coronavirus pandemic.

Safety measures being implemented for its return will see only essential staff and drivers travel to the event, while coronavirus testing will be carried out prior to the races in addition to on-site screening every day upon arrival at the track.

In line with German government guidelines, a maximum of 1,000 people will be allowed on site at any given time, including local suppliers and medical crews. Each Formula E team will be able to bring 20 staff to the races, with all other operations being carried out remotely.

Those on site will be required to wear face masks and observe social distancing, as well as limit their movement between different defined workspace zones.

Formule E chief executive Jamie Reigle said: “Since taking action to suspend our season in March, we have emphasised a revised calendar which places the health and safety of our community first, represents Formula E’s distinct brand of city centre racing and offers an exciting conclusion to the compelling season of racing we had seen so far.

“We’re heading to Berlin Tempelhof, a venue that our teams, drivers and fans love, to stage a nine-day festival of racing with three back-to-back double-headers.

“The festival will feature three track layouts, presenting a new challenge and creating the conditions for an unpredictable and drama-filled climax to our season.”

The Austrian Open will take place two weeks before the British Masters, which was originally touted as the European Tour’s first tournament back, from 9th to 12th July, followed by the Euram Bank Open the week after.

Meanwhile, the Board of Control for Cricket in India (BCCI), the national governing body, has reportedly identified 26th September to 8th November as a ‘tentative’ window for the postponed 2020 season of the Indian Premier League (IPL), the world’s most lucrative T20 cricket competition.

The dates clash with this year’s International Cricket Council (ICC) T20 World Cup, which is scheduled to take place in Australia from 18th October to 15th November, meaning the IPL’s plan would rely on the international tournament being moved.

Earlier this week, Cricket Australia (CA) chairman Earl Eddings cast major doubt on the T20 World Cup going ahead as planned, indicating it would be “unrealistic” to stage a global tournament amid the coronavirus pandemic.