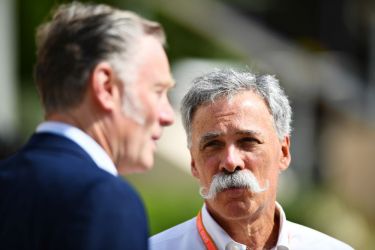 Formula One has held several talks with Saudi Arabia over the prospect of hosting a race in the Kingdom by 2021 as part of a deal that would run into tens of millions of dollars, according to a report by the Times.

The global motorsport series has held multiple discussions in recent months with interested nations in its push to expand the championship beyond 21 Grands Prix, with Morocco and South Africa said to be options.

However, a source quoted by the Times claims that the Liberty Media-owned series wants to “showcase as much as possible that sport is diverse” and that it would only take the championship to Saudi Arabia if a “significant” number of reassurances are made by the state.

Some of the issues cited include human rights violations, women’s rights, and the freedom of the press, while the report also claims that an agreement would only be approved under the assurance that every women involved in the event has the same rights as their male colleagues.

A Formula One statement read: ‘We are always having conversations with many countries and destinations regarding potential future races. As usual these discussions remain private and we are not going to elaborate further on this subject.’

A prospective move would follow in the footsteps of the all-electric motorsports series Formula E, which held its season-opening race in Ad Diriyah, on the outskirts of the Saudi Arabian capital, Riyadh, in December.

Formula One already hosts races in the region, including Abu Dhabi and also Bahrain, with the latter coming in for criticism around accusations of human rights violations in the country.

The latest development follows an announcement in May to award the Abu Dhabi-based MBC Group exclusive rights to broadcast Formula One in the Middle East and North Africa (MENA) territory, where the series’ owners want to expand the series’ fan base.

The vacancy became available after Qatar-based pay-TV broadcaster BeIN Sports decided in February not to renew its five-year MENA rights partnership with the championship, in a stand against piracy in Saudi Arabia.

In April, the US government also named Saudi Arabia on its Priority Watch List amid ongoing pressure to bring down the Saudi-based pirate broadcaster BeoutQ, which has been stealing BeIN content and also impacted Formula One’s broadcast rights during the 2018 season.

A BeIN statement read: ‘It is curious that in the same few weeks that the UK Government, Fifa, the Premier League, Wimbledon and others stand up to condemn Saudi Arabia’s rampant theft of sports rights, Formula One continues to turn a blind eye.

‘This is not only commercially self-harming given the broadcast feeds of Formula One’s global broadcast partners – including Sky, ESPN, Fox and Channel 4 – are widely available for free on BeoutQ’s IPTV function, but it is also remarkably short-sighted given every day that BeoutQ exists, Formula One’s rights are worth less.

‘Illegal broadcast piracy is the biggest threat to the sports and entertainment industry and Saudi Arabia’s BeoutQ is pouring petrol on the problem. Most sports organisations are trying to do something about this epidemic; Formula One is only encouraging it.’

In response, Formula One said that the series ‘takes intellectual property infringement of this nature extremely seriously’ and that it ‘will take appropriate action’ against those involved in acts of piracy.