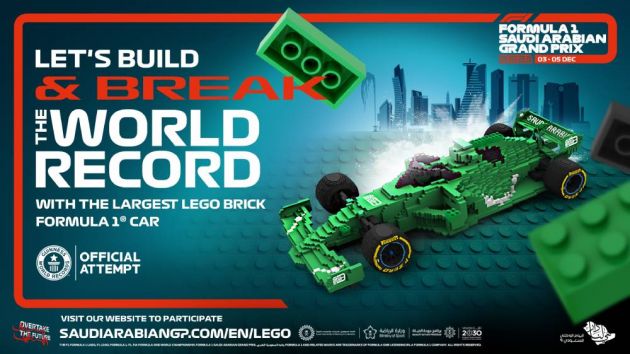 The Saudi Automobile and Motorcycle Federation (SAMF), promoter of Formula One's Saudi Arabian Grand Prix, has announced its plan to launch the world's largest Lego brick build of a Formula One car.

The series is set to visit Saudi Arabia for the first time on 3rd to 5th December 2021. In celebration of this, SAMF announced the brick build to raise funds for Saudi Arabia's national charity, Ehsan.

The Lego build will take place in Red See Mall, Jeddah, from 15th September. The project is expected to be completed on 23rd September, Saudi Arabia's national day.

A representative from Guinness World Records will be present via live stream to certify the Lego brick build of a Formula One car as the world's largest.

In addition, fans in Saudi Arabia will be able to purchase a Lego brick which will form part of the build, with the funds from each purchase going to Ehsan. The build will be completed by Lego professionals.

As part of the activation, the race site will feature display boards showing a live percentage bar of the car's completion. Additionally, the site will also feature historic Formula One race statistics, driver interviews and Formula One content in the buildup to the race.

"It is with great pleasure that I announce our plan to build the largest Lego brick build of a Formula One car the world has ever seen," said Prince Khalid bin Sultan Al-Abdullah Al-Faisal, SAMF chairman.

"The 2021 Formula One Saudi Arabian Grand Prix is all about breaking records and we are therefore delighted to have another record breaker on our hands, with the Jeddah Corniche Circuit also set to become the longest and fastest street circuit in the world.

"This exciting project is all about giving back to our community and truly reflects our kingdom’s true ingenuity and commitment to improving the lives of all our citizens. I could not be prouder to be a part of building a better future for our nation’s youth and I am very excited to see the outcome of this ground-breaking activity."