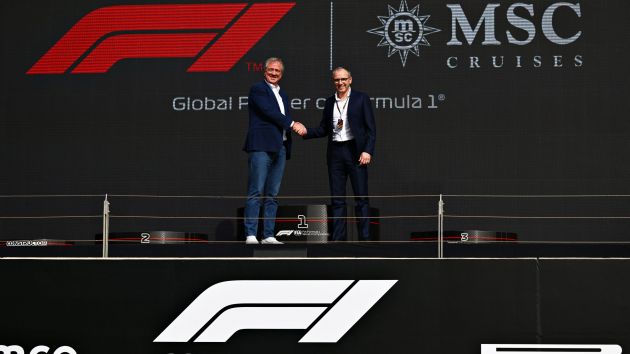 The agreement for the 2022 season will see MSC ships brought portside during select races throughout the year, with trackside branding - as seen at the Bahrain Grand Prix on 20th March - providing the Swiss company with additional visibility.

Formula One has agreed a number of new global partnerships in the past two years, with both the Aramco oil firm and the Crypto.com exchange platform joining the series' top sponsorship tier since the start of 2020.

Deals in that category tend to be worth between US$20 million and US$30 million per year. The agreement with Crypto.com is purportedly worth the lower of those figures, while an impending agreement with Salesforce reported by Front Office Sports (FOS) was pegged at US$150 million over five years. Not long after the ten-year Aramco agreement was unveiled in March 2020, Motorsport Week reported that agreement was worth more than US$450 million over its duration, although that includes title sponsorship of multiple races annually.

No financial details or length of contract have been confirmed for the MSC Cruises partnership at this stage. However, the ‘official cruise partner’ deal also has a sustainability element, as both parties confirmed they will be collaborating on new technologies as part of respective plans to achieve net-zero carbon emissions.

Stefano Domenicali, president and chief executive of Formula One, said: “We are both committed to sustainable solutions, and MSC’s insight and expertise perfectly complement our global offering and will continue to enhance our brand.”

Formula One has also announced a new partnership with AlphaTauri, signing a two-year agreement which designates Red Bull’s clothing brand as an official premium fashion supplier. Formula One personnel, including senior staff and presenters, will be kitted out in AlphaTauri supplied apparel for the duration of the contract.

As Formula One returned for the 2022 season a number of teams also announced new partnerships. Mercedes have agreed a new deal with digital and engineering solutions firm Akkodis, as well as expanding their Formula E team’s official engineering partnership agreement with Modis to cover the Formula One operation too.

Elsewhere in the Formula One paddock, McLaren have revealed a licensing agreement with The Memento Group (TMG) which runs until the end of the 2024 season and will see the specialist firm sell team memorabilia via F1 Authentics - the series’ official platform.

In addition, Alfa Romeo have named Ceramica Cielo as an official partner for 2022, securing branding for the ceramic manufacturer on the team’s cars.